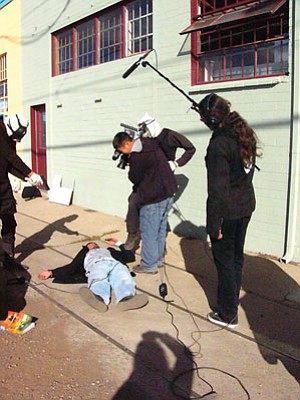 FLAGSTAFF-While their peers enjoyed a five-day vacation over the Thanksgiving holiday, 12 area students gave up three days of their vacation to learn about filmmaking from the ground up. In less than 26 hours, these dedicated youth produced two complete short films through the conceptualization, writing, storyboarding, filming and editing processes.

The youth gathered into two teams-Green Team and Red Team-on Friday, Nov. 24 and began discussing what they wanted to produce. The work continued on Saturday, when Green Team finished filming on location at Bushmaster Park.

Due to technical problems, Red Team was still filming on Sunday morning, but by lunchtime, both teams were hustling through production. At 8 p.m. that night, both teams had completed and screened the first versions of their films.

They were surprisingly complete, needing only captioning, credits and a little tweak here and there.

This was the second year of the Youth Media Project headed by Klee Benally and his Indigenous Action Media (IAM) organization in collaboration with Native Movement, a Flagstaff-based organization designed to empower Native youth. Benally was assisted by volunteers Clayson Benally, Kelvin Long and Cathy Rexford.

Shelby Rae and Kee Wilson returned for a second year. These young Navajos have already earned awards for their work. Rae (along with Talisha Biakeddy and Heather John) directed "Marble Gangsta" at an earlier Youth Media Project workshop, and was scheduled to appear at the Smithsonian Institution, National Museum of the American Indian's 13th Native American Film and Video Festival in New York City.

Rae won an all-expenses-paid trip for herself and her sister to attend the event. The film, along with Klee Benally's "The Snowbowl Effect" was shown on December 3.

Wilson worked on "Interview with a Werewolf," which won a People's Choice award at the Third Annual Southwest Native American Film and Video Festival held at the Museum of Northern Arizona on July 14-15.

Red Team members Wilson, Shonri Begaye, Alex Soto, and Jake Hoyungawa conceptualized and wrote the new film, "Knowledge is Dangerous." Soto, a student of Phoenix College, brought considerable experience from the music production business. He used these skills to weave a soundtrack for the film.

Soto also played the part of a banned book dealer in contrast to Begaye's character, a student overwhelmed by government-controlled history seeking the truth locked in forbidden books.

As Begaye makes a selection from the trunk of Soto's well-stocked Cadillac, they are spotted by futuristic cops (played by Klee and Clayson Benally). Soto is gunned down in the street and Begaye takes a shot to the leg as she escapes with two banned books. Years later, Begaye starts an underground reading group.

Begaye, Hoyungawa and Soto took the helm as the group tossed around editing ideas.

In another office, the Green Team worked on their own feature, "Inner Voice." The principal actors in this film were Camille Tso (who appeared in the miniseries "Into the West," acting alongside Irene Bedard) and Jared Grey. Grey, who had no previous experience, played the leading role of the skateboarder who hits a tree and seemingly awakens with the power to hear plants, trees and rocks. Conversations with a tree (voice of Kelvin Long) and an unsympathetic houseplant (voice of Rhiannon Bahe) convince Grey that he has lost touch with reality.

Tso, the youngest person on the project at 11, played a very convincing psychiatrist. Alberta Nells acted in a cameo appearance as Grey's mother.

By Sunday evening-past deadline-the number of young people available to finish the projects shrank, and members of both Green and Red teams hurried back and forth to check on the progress of their competition. Though all faced classes the following morning, the energy level remained high to the very end.

Jared Grey, a freshman at Sinagua High, heard about the workshop through a friend and decided to participate even though he had no previous experience in filmmaking. "It's hard to be an actor," Grey said. "Editing is also difficult. I might see myself in the future as a videocam operator, but not an actor. This [experience] was definitely worth it."

Brandon James, a senior at Ponderosa High in Flagstaff, also had no previous experience.

"Dezbah's sister told me about the workshop," James said. "I participated in marking the film, some of the filming and editing. It was cool."

Rhiannon Bahe, a student of Coconino High School in Flagstaff, said that she heard about the last workshop, and wanted to be involved in this one. "I am really happy about doing this," Bahe said. "I wouldn't have done anything over break otherwise."

Bahe has included acting as a career, and would like to make movies, especially documentaries, comedies and spoofs.

Jake Hoyungowa, a senior at Coconino High School, said that making the film was fun.

"It's a challenge," Hoyungowa admitted. "We worked through a three day period and produced complex scenes."

Klee Benally looks towards accessibility to media production on reservation communities and believes it is important that these communities have the ability to present their own stories.

"Currently, corporately controlled media does not tell our story and we realize they probably never will," Benally said. "We are going to create a media-or rather, a way of telling our own news, stories and histories to our communities. This is regardless of whether corporate media listens or not, because we are going to listen to each other."

By training youth to produce their own films, even on shoestring budgets, Benally and other native filmmakers encourage community ownership of media, recognizing the inherent creative energy of youth.

"I want to share media literacy, help the youth look at the role media plays in a community, and what the immediate impact it has on that community," Benally said. "What if they were sharing their own stories about their history, their culture and their community? This way, they become the media."

Soto also enjoyed the project. "It was cool. I've dealt with audio production, but there is so much more involved in making films," Soto admitted. "It is a lot of work. I wish we had more time with this. We could get lost in the doing of this work."

Rexford, an established producer, playwright, essayist and activist, is an Inupiak from northern Alaska. She was named Miss World Eskimo-Indian Olympics in 2002, and is a student of the Institute of American Indian Arts (IAIA) in Santa Fe, New Mexico. Rexford was impressed with the young people's work.

"They did a wonderful job," she said. "It was exciting to see how much high energy they put into the project."

Benally established Indigenous Action Media in 2001 with the focus of helping indigenous youth address environmental and social justice issues through creative forms of media outreach. He wrote and directed the award-winning film "The Snowbowl Effect," along with other films and videos.

The event was co-hosted by Native Movement, The Sierra Club and the Arizona Ethnobotanical Research Association.