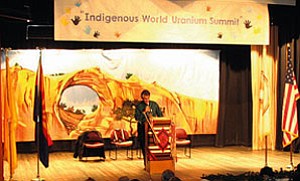 WINDOW ROCK - The Navajo Nation's firm desire to remain uranium- and nuclear-free is again in the world and national spotlight this week with the opening of the Indigenous World Uranium Summit last week, Nov. 30-Dec. 3.

Some 300 people from 14 countries and numerous Indigenous nations have gathered here for the three-day summit. The summit comes 14 years after the World Uranium Hearing held in Salzburg, Austria, where delegates declared the right of Indigenous people to decide against the exploitation of their lands and resources for uranium mining, waste dumping and nuclear testing.

On Wednesday, summit delegates toured former uranium mining sites and the abandoned United Nuclear Corp. milling and tailings disposal facility near Church Rock, N.M. On Thursday, Navajo Nation President Joe Shirley Jr., welcomed the delegates as relatives of the Navajo people, saying that the Navajo Nation needed friends to help it have Navajo law respected and to keep uranium mining off of Navajoland.

On Friday, The Seventh Generation Fund, the International Physicians for the Prevention of Nuclear War and the Franz Moll Foundation will present the 2006 Nuclear-Free Future Awards. Among the recipients this year will be Red Valley Chapter President and Navajo Nation Council Delegate-elect Phil Harrison as well as the Southwest Research and Information Center of Albuquerque.

In his welcoming address Thursday, President Shirley said the job of protecting land, water and people from the harmful effects of uranium mining begins with people from all over the world coming together to learn from each other and plan through summits like this.

"As Diné people, we're also looking for friends to help us defend ourselves against those who would break our laws to get at the uranium ore underneath our lands," he said. "At the same time, they will contaminate our lands, our water and our people. It seems like some people out there, all they care about is money."

A focal point of the summit is the 2005 Diné Natural Resources Protection Act which banned uranium mining and processing within the Navajo Nation. Despite the law, several companies have expressed renewed interest in bringing uranium mining back to Navajoland or land adjacent to the Nation. A session on the enactment of the law will be held Friday and will be moderated by Stephen Etsitty, executive director of the Navajo Nation Environmental Protection Agency and feature Navajo Nation Attorney General

On Tuesday, the Gallup, N.M. City Council unanimously passed a resolution in support of the Diné Natural Resources Protection Act.

President Shirley acknowledged that a great amount of uranium exists under sacred Navajo land. But that is where it should remains to avoid repeating the mistakes of the past that left thousands of Navajos ill and has taken the lives of hundreds, he added.

"In times past, they've already killed many of us with their encroachment upon our lands to mine the ore," he said. "As we meet this week, more Diné people are dying from having been poisoned by uranium ore."

He said the mining took place decades ago but numerous sites remain to be cleaned up. In the meantime, tailings have contaminated Navajo land, water and children.

Hazel James, one of the principal organizers of the summit, said the key point of the gathering is to raise awareness of the continuing problem posed by uranium mining and the contamination it leaves behind.

"The importance of this is to keep the land preserved and the water and the people for future generations," she said.