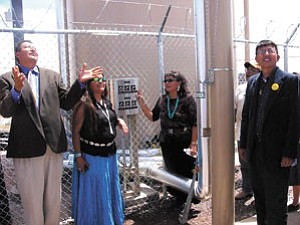 GRAND FALLS - Leupp Chapter held its Aug. 17 chapter meeting under cover of a large red and white tent next to a brand new well that El Paso Natural Gas donated to the chapter.

Although important issues came up for discussion -including a west Canyon Diablo wild horse roundup, a 25-year lease with two 10-year extensions to the Pic and Run store, future economic development and the request of a supplemental appropriation from Congress in the amount of $275 thousand for a three-phase water line extension to the Leupp Farm site - people could not help but gaze out at the new well.

"The community of Leupp is really taking water development seriously, so we are really trying to build and develop as many water wells in the area using the C-aquifer," Chee said. "This strengthens our claim to our water and we want to be able to develop it and use it for our use, not coal companies, not for anyone else. So this is the third well that we've done in the past two and a half years. There's also one major water line for Tolani Lake that is almost there. Then we reactivated three farm projects using the C-aquifer water."

Chee said that there is an additional well slated for the near future.

Chris Castillo, employed in El Paso's legal department in Colorado Springs, Colo., told the large crowd gathered beneath the tent that it was a true honor and privilege to be part of an historic event in the El Paso/Navajo Nation/Leupp Chapter relationship.

"Economic development has been a precursor for El Paso over the years," Castillo said. "What we've found is the Leupp leadership and the welcome they've offered. It's been inviting and exciting to see such enthusiasm in the Navajo people and particularly those of the Leupp Chapter.

"We worked really hard, and we've worked really long, and like Mr. Chee said [in his introduction], we had some heated discussion and some diverse debate of what the well would be comprised of," Castillo continued. "We finally came to a resolution and I think from the bottom of my heart that you will find that this well is state-of-art technology, second to none. It exists out here at Leupp Chapter for the benefit of your people and the [Navajo] Nation's people. We're just so honored and so proud to be a part of that."

Castillo referred to Lynda Lovejoy's statement earlier in the meeting, agreeing with her that the El Paso relationship with the Leupp community is no longer a lessee/lessor kind of relationship.

"It's more a partnership kind of relationship," Castillo said.

Castillo expressed his appreciation to Leupp Chapter leadership over the past years - Leonard Chee, Walter Phelps, Thomas Cody and Alex Riggs to name a few.

"I'm the project manager responsible for helping put this facility together," Yanagisawa said. "It's something I couldn't have done without the cooperation of a whole lot of people both within El Paso and the Leupp community."

Yanagisawa said that when he'd visited the old facility when the groundbreaking ceremony for the new well project took place, he took a look and told himself that he knew that he could do better.

"I'm an engineer by trade, and I like to build things I'm proud of. And with the help of so many of the people here, I think we have a facility here we can be proud of for a long time to come.

"Last time I was here was at the groundbreaking. I had Mr. Cody next to me when the dedication was being done. I had the pleasure of having him give me a running translation thanking Mother Earth for water, apologizing to her for piercing her skin, but that her children need the water. Well, I think the water's finally here."

"I've stood in front of many of you all for the past four years, and as you all know, I moved to northern Arizona from the great state of Wyoming and came out to the Leupp Chapter to work with Mr. Riggs initially and this was an ongoing project that a lot of people talked about, but nothing had happened to date," Sanchez said. "So to kick it off, the hard ball player over here (gesturing toward Chee) knocked us around a little bit. But that's okay. It allowed us to develop a strong relationship between El Paso and the Leupp Chapter. I've had the opportunity to meet and work with several folks within this tent. I've even gained some friendships out of it. With that being said, Leonard promised you a first rate well - there it is."

Gabe Freeland, who owns his own consulting business in Window Rock, thanked El Paso for providing the Navajo Nation the opportunity to experience true partnership.

"I want to thank El Paso for really putting its foot forward in demonstrating to the Navajo Nation that with true partnership we can develop true friendships with big business," Freeland continued. "They can become friends and allies not only here on the Navajo Nation but in the state government and in Washington D.C. I think for far too long we've been bumping heads and now we need to embrace each other and have big business come in."

Freeland advised outside business entities to remember to treat the Diné people with respect, gratitude and appreciation.

"We have been here a long time," Freeland said. "We have struggled. Our ancestors have struggled. I've seen my grandmother struggle, and she's 92 years old, sitting at home wondering who is going to take care of her livestock."

Thomas Cody announced the gift of a new water hauling truck to the Leupp Chapter by El Paso, and thanked them for their generosity.

"El Paso came through, they've done their part, and I'm saying that now it's up to us as residents and users to take care of it," Cody said. "No graffiti, no litter whatsoever-we'll do our part in honoring this."

"Many of us do not realize how precious water is," MacDonald said. "A human being cannot go more than two or three days without water. But a human being can go without food for more than two weeks. Water is very precious. That water is yours. It's yours for many, many thousands of years. This Navajo water belongs to Navajos. We are thankful to El Paso for developing our water for us."

MacDonald said that the Navajo Nation should realize that it is possible to make water available across the reservation, and that it should consider putting a well like the one at Leupp in each of the 110 chapters.

Looking to Lovejoy and Phelps, MacDonald announced that the first thing he would like the new administration to consider is delivery of water to the Navajo people.

MacDonald also suggested that one well like the one at Leupp could realize about $30 million in revenue for the Navajo Nation.

"I understand that [the well] pumps 240 gallons per minute," MacDonald said. "If you sell this at 60 cents a gallon for 10 hours a day, that's a lot of money from just one well."

The crowd moved from under the tent for the actual dedication of the well, and crowded in to watch the well deliver its first load. Maybelle Cody McCabe was the first resident to use the new well.

McCabe has been hauling water for a long time, and was thrilled to find that new water sources have been developed closer to home. She estimated that hauling water from a water station about 10 miles away cost her about $300 a month.

"I just feel really honored for the community that we have such good working staff at the chapter, and all the kind people from El Paso and the other dignitaries that made this possible. I think it is just awesome. I feel really good about it."