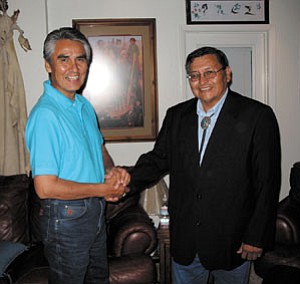 WINDOW ROCK - The Navajo Nation presidential primary race is barely over, but the politics are already heating up for the general election.

Lovejoy, who finished second behind Shirley in the primary race Aug. 8, said the current administration is out of touch with the wants and needs of the Navajo people.

George Hardeen, a spokesman for President Shirley, said that is "clearly wrong." Hardeen said the president didn't attend as many chapter meetings as some of the candidates because he was busy attending to his official duties and would only campaign on weekends.

"If that's all she can say she hasn't been reading the Gallup Independent, Navajo-Hopi Observer and Navajo Times," he said.

Hardeen said President Shirley has a slate of economic development that would fill a page, has doubled the amount of police officers and was able to ban uranium mining with the help of the tribal council.

Hardeen said President Shirley gives quarterly reports to the Navajo Tribal Council that are one-quarter inch thick. He said these reports give updates on every division.

"She has not requested one of these reports," he said. "It's easy to make the charges she makes, but it's rhetoric without substance."

Hardeen said President Shirley has done more in three and one-half years than any other chairman. He pointed to the San Juan River water settlement, banning uranium mining, doubling police officers and a pending agreement on the Bennett Freeze as 30-year problems that other Navajo leaders did not solve. He noted that Chairman Peter MacDonald, who was in office for 16 years, was not able to obtain the San Juan River water settlement.

Lovejoy said the Navajo government has been fiscally irresponsible, but Hardeen said every division's budget is scrutinized by oversight committees.

Hardeen explained that when President Shirley found out about the Head Start problem he formed a core group to address it.

"The purpose of government is to solve problems and that's exactly what's happening here," he said.

Lovejoy said the Navajo government is in discord. Hardeen responded that is not the case or the government would not have made progress with the San Juan water settlement, banning uranium mining and doubling the amount of police officers.

"There's been a tremendous amount of progress, but President Shirley has been the first to say that he can't do it alone," he said.