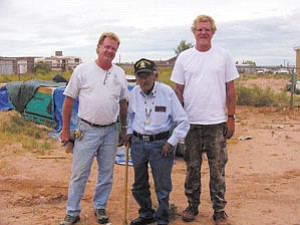 S.J. Wilson/Observer Robert Bowman, Merrill Sandoval and Craig Bowman look out at the foundation of the veteran’s home which the Bowmans have volunteered to build for the elderly Code Talker.

TUBA CITY - Craig Bowman doesn't often read the paper, but on the morning of Aug. 9, a picture on the front page of the Navajo Hopi Observer caught his eye. It was the picture of Navajo Code Talker Merrill Sandoval. Craig sat down to read the story over breakfast as he waited for his father, Robert Bowman. The senior Bowman is a licensed building contractor and businessman from Phoenix, and was due in Flagstaff to take care of some private business.

"When I saw Craig, he showed me the story," Robert said. "I read it over, then looked at him and said, 'You want to do something about this, don't you?' Craig told me yes, and I said, 'Good, because I do too.' "

Craig contacted the offices of the Observer only an hour or so after the business opened and left a message asking a reporter to contact him.

Craig quickly explained that he and his father wanted to build the Sandoval house.

Mike Carroll and Randi Sandoval (one of Merrill's granddaughters) were shocked to hear the news, and quickly organized a meeting between Merrill and Lorraine Sandoval and other members of the family. Mike and Randi, who had contacted the Observer about the situation facing their grandparents, admitted their shock at how quickly help had come.

"I can't believe this is happening," Randi said. "It is like a miracle."

Though the pair of contractors had already spent almost a full day in Flagstaff, they enthusiastically agreed to meet with the Sandovals.

The two families came together at the Big Ranch Restaurant in Flagstaff - where Robert and Craig Bowman explained their intentions to Merrill Sandoval.

"We want to build your home for you," Robert said. "We want to volunteer our services."

As the meeting progressed, Merrill's son, Gary, stopped what was an amazingly swift process to thank the Bowmans.

"I want to say right now that I didn't believe that people like you existed out there," Gary said. "I want to thank you for what you are doing."

"It is a pleasure for us," Craig - who is currently enrolled in the forestry program at Northern Arizona University - told Gary.

"We were raised like that," Robert said. "My dad and my grandfather helped others in our community. If someone needed a barn built, we all came together to help. My son has a good heart too."

Robert went on to describe his family's military history - one that includes his own father, himself and his other son.

The Bowmans were serious in their intention to help, and insisted on driving to Tuba City that very night. There, they launched into the process of surveying the property, measuring the work that had been done on the foundation, and with the volunteer assistance of Franklin Begay, a backhoe owner and operator from Tuba City, checked the sewer system to ensure that the slope would be proper for hooking the new home up.

The men worked together until long after dark, when Robert Bowman announced that he would do what he could to get the Sandoval's home up. That included the volunteer services of himself, his sons and other crew members from his company. After studying the floor plans of the house, he announced that he would supply the materials to complete the extra bathroom and utility room that the elderly couple had hoped for.

"Everything I am doing is for that gentleman right there," Robert said, gesturing towards Merrill.

Merrill autographed copies of a beautifully illustrated book by Japanese photographer Kenji Kawano entitled Navajo Code Talkers, which he presented as gifts to both Robert and Craig.

By Aug. 11, Robert had contacted the Sandoval family and announced that a building crew would begin the home the following morning.

Both Saturday and Sunday, Sandoval family members were busy assisting in the building crew as well as cooking for the enthusiastic group. By Sunday afternoon, the floor and framing for the outside walls were in place and Franklin Begay finished the evening's work by filling in the trench surrounding the foundation with a small front end loader - again volunteering his services. As he drove the machine, his two sons assisted with shoveling.

"We are so grateful to everyone for their help," Merrill Sandoval said. "Robert and Craig are very good people."

"We can't believe this is happening," Lorraine Sandoval said. "It is wonderful. We are so happy and relieved."

Work on the Sandoval home will resume on Saturday, Aug. 19.