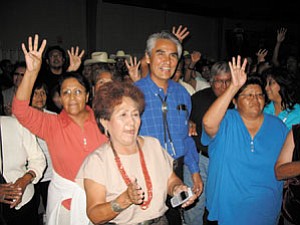 Photo by George Hardeen President Shirley and First Lady Vikki Shirley at the Navajo Nation Civic Center, Aug. 8, amidst cheers of “Four more years” from his many supporters.

The two will square off in the Nov. 7 general election.

"We let people know what we're working on and we let them know where we are on projects," he said.

Shirley said Lovejoy's second place finish was a surprise because nobody knew who would do well since there were 11 candidates and many of them were working hard.

Shirley said he doesn't know Lovejoy and hasn't thought about how he feels about running against a woman.

Shirley said the difference in the general election will be how the two candidates address the issues and how they campaign.

Shirley said the top three issues are creating jobs, creating revenues and streamlining government. He said a casino in Navajo, Ariz., should get going in 30-60 days. He said it will be the first of six casinos that will create 4,500 good paying jobs.

Shirley said more economic development is needed in Navajo country because the tribe currently has $120 million in revenue that is not enough to serve the 300,000 Navajos.

He said more funds are needed for direct services such as health care and public safety. He added that the government needs to be streamlined so that it can do a better job of providing those services.

Shirley said the top three accomplishments of his administration has been getting casinos off the ground, jump-starting the Desert Walk Power Plant in Burnham, N.M., and banning uranium mining. He noted that in 2002 he campaigned on getting casinos going and he continues to work toward that goal.

Shirley said the Desert Walk Power Plant, which will be coal fired, should open in 2007 and create 2,000 jobs within four years.

Shirley said the ban on uranium mining may soon be tested, but he considers it a major accomplishment. He said it shows that while Navajos want economic development that they also want to preserve the land.

Shirley said he appreciates all his supporters, especially his campaign manager Lena Fowler.