Hopi Chair. Sidney speaks candidly on his own behalf 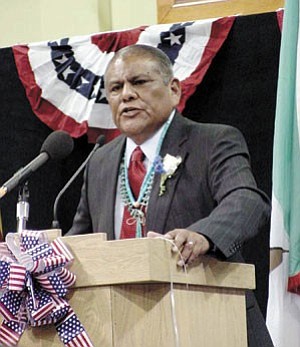 KYKOTSMOVI ----Hopi Chairman Ivan Sidney said he wants to cooperative with the Hopi Tribal Council's investigation into an alleged misconduct incident, but he feels that his political adversaries are blowing the incident out of proportion.

Last Thursday, the Hopi Tribal Council decided during executive session to hire an independent investigator to look into the incident. The tribe has not yet decided who to pick or how much to pay him/her.

The independent investigator will have 30 days to come up with recommendations, although that 30 days can be extended by the Hopi Tribal Council.

Hopi Councilman Clifford Qotsaquahu filed a complaint of misconduct against Sidney for an incident that occurred June 27 at the Adobe Inn in Winslow.

Chairman Sidney noted that there was no arrest in the incident, he was not driving at the time and he was not on tribal business as he was on sick leave.

"The police don't normally release information that is non-arrest related, especially when it deals with medical information," he said. "If there was no arrest, what was the purpose for releasing the information? I heard Winslow was prejudiced and this shows that to some degree it's true."

Sidney said some police officers at the Hopi Police Department also acted inappropriately by spreading rumors that Sidney had been given a DUI. Sidney has filed a complaint against them with the Bureau of Indian Affairs and an internal affairs investigation is underway.

"It's time to heal these wounds and look at the rights of the people," he said.

Chairman Sidney said Canty, the tribe's general counsel, was reviewing the information. Sidney said his political adversaries are trying to influence the tribal council and the public.

Sidney said he deserves to be criticized for using alcohol. He points out that it is legal to drink off the reservation, but he is still apologetic.

"What does it say to the children? It sends the wrong message, but we all make mistakes. People are treating me like I drink every day. That's not the case. If that was the case, then I would be in alcohol rehab. I'm apologetic and not happy with myself. I'm embarrassed. This has been an awakening and it won't happen again. But I need to be afforded fairness and I need the opportunity to express myself."

Some have told Sidney that the overwhelming number of Hopi people want him to step down.

"But I've been flooded with calls encouraging me to continue on with my head up," he said. "Off reservation people tell me they don't believe everything they read in the papers."

Sidney said he had no problem with the council voting in executive session and he understands that he was excluded from participating because that is what the Code of Conduct policy calls for. However, the code also calls for the one filing the complaint not to participate and Quotsquahua did exactly that.

Sidney said he will be in the villages and willing to answer any questions the Hopi people have.

Sidney campaigned on Hopi needing an alcohol treatment center. He said progress is being made toward this as he has met with Indian Health Service officials

"We don't want bigger jails to hold people who have been drinking," he said.

Sidney said the tribe is looking for funding for a treatment center. He added they are currently figuring out the size of the facility and the staffing that is needed to see how much money they need.

"IHS needs to look at this because it is a health problem," he said.

Also toward the top of his agenda is economic development as he is working on a plan.

Sidney concludes that his family loves him and he has friends and supporters who are behind him.