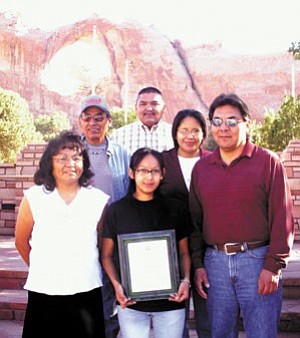 WINDOW ROCK -- The Division of Community Development's Solid Waste Management Program was awarded 2006 Tribal Recycler of the Year for addressing solid waste and recycling issues. The SWMP was awarded during the New Mexico Recycling Awards, which are presented every other year, this year held June 14, at the Hotel Albuquerque in Albuquerque, N.M.

Benally said that the award would not have been possible without the recycling campaign efforts by former SWMP employee Debra A. Yazzie.

The SWMP is supported by the DCD Administration with its budget priority to establish tribal solid waste authority to manage the solid waste management activities on the Navajo Nation.

James Benally is an active member of the New Mexico Recycling Board.