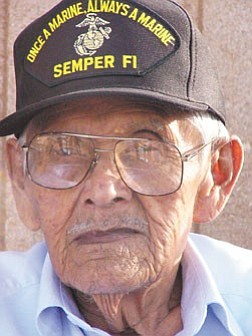 Photo by Paige Sandoval Code Talker Merrill SandovalÕs dream of a new home has been beset with one obstacle after another.

Towards the end of July, Gary found out that what his parents applied for was the supplies to build a house. Without notification of delivery, a double semi truck arrived at the elderly couple's home site in Tuba City. The driver told them that they would be responsible for hiring the labor to unload the materials for their new home.

Merrill, 81, is a member of the celebrated Navajo Code Talkers. He and his wife have raised 12 children -- five of their own, the rest grandchildren. Two grandsons currently live with them now. They have lived in the now-worn "demo" double wide they have called home for at least 22 years. They celebrated their 55th wedding anniversary there on Aug. 27.

The clean, comfortable home is full of memories -- walls filled with pictures of children, grandchildren and other relatives. There are pictures of Merrill in uniform with other servicemen he called friends. But water damage necessitates a new roof, and the home is in need of a serious facelift. This led Merrill to explore his options as a veteran. One option was to apply for a home repair loan.

"We first asked about getting a renovation, but we were told that our trailer wasn't worth it," Lorraine said.

The Sandovals then applied for what they mistakenly believed would be a complete home about three months ago. Instead, they were to learn that they had received $40,000 in building supplies -- but nothing else.

On July 19, the Sandovals made what was for them a difficult decision -- to tell their story to the press.

"My father is one of the most humble men you would ever meet," Gary said. "He has never relied on a government entity for anything. It is still hard for him to ask for anything. He is not begging now -- but I am willing to do it for him."

"We are really very thankful to have the material, but we thought the house would be built for us," Merrill said. "This is the first time we ever asked for anything. But what am I going to do with a kit? I'm 81 years old! We are on a fixed income.

"I really didn't know the details. I just knew that some veterans were building houses. There is one across the street from us," Merrill said. "He [the owner] was here last night, and he was really unsatisfied with the way they set up for him."

There were problems with the basic design Merrill and Lorraine were originally offered. The floor plan did not include a utility room or a second bathroom, something they feel they need -- nor does the kit include air conditioning. Also, both doorways were situated in the living room/kitchen area -- leaving the bedrooms and bathrooms down a long hallway without an exit should a fire break out in the living room.

This led the couple to expanding the plans -- but they will be responsible for the cost of these additions.

Sandoval reflects on his military career frequently -- and travels throughout the country to talk to schools and other gatherings about the code that made the Navajo Code Talkers world-wide celebrities after declassification in 1968.

"I survived Iwo Jima," Sandoval said. "There were about a million casualties, but I don't blame the Japanese -- it was their land and they were fighting for it. I would fight for my land."

War was a frightening experience, Sandoval said. A member of the Fifth Marine Division, he was once captured by a U.S. Artillery Unit, thought to be a Japanese. He remembers one Navajo -- Joe Kieyoomia -- who was captured by the Japanese.

"When the Japanese found out that he was a Navajo, they tortured him and tried to make him interpret the code," Merrill said. "He couldn't do it."

Sandoval left the Marines and returned to the reservation, serving his people as a Navajo Nation Police officer and a legal advocate with DNA. In that capacity, he helped countless people.

"A lot of people owe him money," Gary said. "He has helped many for free, he has done divorces, gotten people out of jail, loaned them money. I used to tell him to try to get it back, but he told me to leave it alone. 'They need their money,' he would tell me."

"Back then I knew a lot of people," Sandoval said. "Since retiring I don't know many people anymore."

Merrill believes that part of the problems he has faced is due to each of 110 chapters trying to set up their own veteran organization.

"It's hard to do. We can't get a bunch together to be a force to lobby the Navajo Nation Council on our behalf."

After the July 19 interview, the Sandoval family rallied and took steps to help the elderly couple begin building their home. A daughter had arranged for a $6,000 loan, which she and her brother, Gary, committed to repay.

The Sandovals hired an in-law with a backhoe to come over and do the excavation for the foundation. This, the couple learned, would cost them $75 per hour. They were also charged for a complete hour for the time the backhoe was driven to their house and back--$150 per day even though it did not take an hour each way.

"While he was here the first day, the backhoe overheated and he could not continue, so he had to come back the next day," Lorraine said -- which incurred another $150 in travel costs. The backhoe had to come back a third day. The couple had budgeted $300 for the backhoe work-- but had spent more than that just in transportation of the backhoe. Their relative is billing them for approximately $500 owed for the work.

With the excavation complete, another relative was enlisted to do the block for the foundation and joist supports. He asked and received payment in advance -- then hired workers he expected the couple to pay in addition to the funds they had given him. The work was not completed, and alcohol on the job-site created additional problems. The joist supports are clearly crooked, and the foundation walls are splattered sloppily with cement.

Now the borrowed money has been largely used, and all the couple has to show for it is a foundation.

The Sandovals have learned that they are not the only ones who believed that they would be receiving an actual house -- and this knowledge was the driving point in telling their story publicly.

Martin Vigil heads the State of Arizona's Veteran's Affairs Office in Flagstaff -- which serves veterans from all 21 tribes in the state of Arizona with the application for federal benefits. He has heard stories about misunderstandings about home kits, and believes that tribal governments need to ensure that their tribal members are best served.

"Efforts should be taken to ensure the veteran has the funds to complete a home before the kit is delivered," Vigil said. "At one time, I understand that Tuba City veterans had their homes completed through a program with the high schools' vo-tech students, but I haven't heard anything about that lately."

Vigil suggested that a partnership between the various tribes and another entity like Habitat for Humanity might be helpful.

"Our influence means nothing," Vigil admitted. "The tribes have their own rules -- they lobby for their own funding.

It is clear, Sandoval family members insisted, that a better system of cooperation is needed to serve veterans who have served their country faithfully.

In the meantime veterans like Merrill Sandoval sit looking out at tarp-covered building materials with no idea how they will see their homes completed.

Gary Sandoval is not the only family member who is openly angry.

"Our Code Talkers are used out there -- it is ironic that they have been called the 'Crown Jewels of the Navajo Nation,' yet my father is in this situation," he said. "After the cameras are gone, it seems that no one from the President's Office on down though the Chiefs of Staff, the Speaker or Council Delegates care about what happens to them."