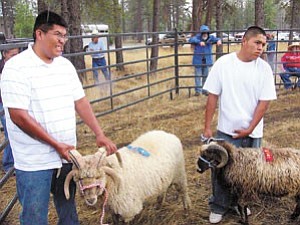 The event took place in Flagstaff across the highway from the Museum of Northern Arizona near its research facilities.

"We talk about sheep issues. We have business to attend to. There are reports to be delivered, we elect board members and we also discuss whether or not we want to get involved in various projects," said Kay Peterson, a board member for the organization DinŽ bŽ'iina', Inc. "We have competitions for sheep, wool and skeins."

The meeting was attended by members of several organizations including the American Livestock Breeds Conservancy, the Center for Sustainable Environments and the Navajo Churro Sheep Project.

Peterson was enthusiastic about the association's decision to form a Slow Food Presidio to serve the Navajo reservation and Coconino County.

A presidio is a "defense battalion," which would work to prevent the disappearance of prized breeds and species. Strategies would include creating a list of endangered foods and sponsoring strategies in the form of expertise and marketing help. The Slow Food movement -- begun in Italy -- works to reinstate "slow food" as opposed to "fast food." Accorging to Slow Food members, food cooked carefully and lovingly in the home, using healthy natural ingredients, is far more healthful. Americans -- plagued by diseases such as obesity and diabetes--would do well to adopt a slower lifestyle centered in the kitchen.

There can be no doubt that members of the NCSA consider the churro sheep a prized animal -- an opinion shared by the Navajo people who made the sheep their own.

According to Peterson, Dr. Lyle Mc Neal is influential in revitalizing the churro sheep -- once on the verge of extinction.

Mc Neal is an expert on sheep and wool, and is currently working at Utah State University.

Mc Neal served as judge for the sheep competition. While he patiently pointed out the perfect points featured on various churros, his wife Nancy waited the rain out with other sheep lovers.

She described how her husband came to hear about an "eccentric rancher who specialized in paint horses, mule-footed pigs and these funny looking sheep.

"His [the rancher] sons had people coming out to shoot the sheep for their heads, which had four horns," Mc Neal said. "Lyle realized that they were the old-time Navajo sheep that he had heard about. He thought about the fate of the buffalo and said that if someone didn't do something the churro sheep would suffer the same fate."

Lyle Mc Neal had completed a study at the Sheep Experimental Station in DuBois, Idaho, about the polypay sheep -- scientifically engineered to produce multiple births. It was ironic, his wife said, that there already was such a sheep -- the churro.

The Mc Neals obtained six churro sheep from California, and in their journey back to Utah noticed that the sheep attracted a lot of attention on the reservation.

"We would pull into a trading post where the parking lot was deserted. When we came out, there would be elders with their grandchildren standing there," Nancy Mc Neal said.

"They would be saying, 'these are the real sheep.' The next thing they said was 'I want these sheep now.'"

The sheep began to multiply and astonished the Mc Neals by producing two birthings in one year.Mc Neal praised the churro for their ability to survive hot summers and cold winters -- and when well-fed, to produce two and three lambs at birthing.

Mc Neal's original efforts to save the breed were considered a step backward, according to Nancy. At that time, she said, breeders were interested in meat, not wool.

Roy Kady, a fourth-generation Navajo weaver, also sits on the board of the NCSA.

Jay Begay Jr. made a strong showing at this year's sheep event -- among his achievements was the first and second placing in the Yearling Ram category -- won during a monsoonal downpour on Saturday, July 29. Later in the afternoon, one of his ewes took Grand Champion Ewe.

When asked about the secret in producing award-winning churro sheep, Begay said that having good rams and ewes for a breeding program is essential.

"You need to have an eye for sheep -- to be able to look for a good match between the ram and the ewe," Begay said.

He also confessed to having an edge.

"My sheep are rez sheep," Begay said with a smile. "They are raised as natural as possible."

Begay is from the community of Hard Rock. He was assisted by his nephew Stephen Bizahaloni. He has shown his churro sheep at the DinŽ bŽ'iina' Inc. conferences, the Coconino County Fair and plans to show in the Arizona State Fair later this year.

The Navajo Churro Sheep Association meets annually at different sites across the country--largely in the Southwest.