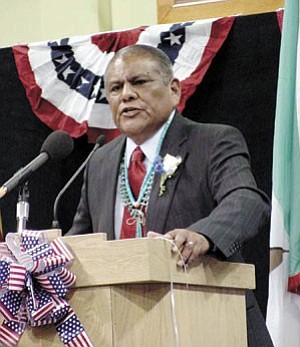 KYKOTSMOVI -- At the quarterly meeting of the Hopi Tribal Council held July 17, Hopi Chairman Ivan Sidney voluntarily claimed a "medical incident" attributed to his alleged misconduct, which reportedly occurred June 27 at the Adobe Inn in Winslow.

In a news release, Chairman Sidney said the facts would be reported to the Hopi people at the appropriate time.

"I can only assure the Hopi people that I did not violate the Hopi Constitution or tribal guidelines," Sidney said. "Nor have I violated any federal, state, county or city laws. I am innocent."

Also in the new release, Chairman Sidney said that political attacks "come with the territory."

"It is unfortunate, however, that my family and the Hopi people have been misled. I apologize to each of you for embarrassment this issue may cause you," he said.

Chairman Sidney said he is "on Hopi to do good things for his people.

Chairman Sidney said the Hopi people asked for a senior citizen retirement center and he has asked the tribal council to appropriate funds for just that. He said Hopi faces hard issues on the Navajo-Hopi Land Settlement and he is prepared to confront the issue.

"We are conducting a complete and thorough investigation of the allegations," he said. "We have advised our client not to comment further on any issues until our investigation is concluded."

The Hopi Tribal Council will hold a special meeting at 9 a.m., Aug. 3, to hear a complaint against Hopi Chairman Ivan Sidney. The special meeting will be held in council chambers in Kykotsmovi.

Clifford Quotsaquahua has filed a complaint of misconduct against Hopi Chairman Sidney.

According to a Winslow Police Department Report, following the alleged misconduct incident, Sidney was escorted to the Winslow Memorial Hospital where he voluntarily signed a medical release and was found to have a blood alcohol content of .311.

The report also stated that no charges were filed against Chairman Sidney.

At the time of the alleged incident, Sidney was on personal leave. He later reported that an incident occurred, but denied any wrongdoing.