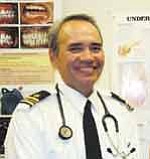 TUBA CITY -- After graduation from Tempe High School, completion of two bachelor degrees and service in the U.S. Army, Michael Truesdell became, in 1996, the first member of the White Mountain Apache Tribe to achieve a Doctor of Medicine degree.

He was a resident at Maricopa Medical Center until 1999 and then joined the Tuba City Regional Health Care Center Medical Staff in August 1999 as a full-time attending Family Medicine physician. During residency, he rotated in the Emergency and Family Medicine departments, which contributed to his decision in returning to work at TCRHCC.

"I had worked at or rotated though several HIS (Indian Health Service) facilities and Tuba City had the best clinical staff and the right mixture of in-patient and outpatient and OB, call, etc.," Dr. Truesdell said.

He is currently the Chief of Family Medicine.

"I do outpatient and in-patient family medicine, work about three weeks outpatient clinics then one-week in-patient service," Dr. Truesdell said. "I do overnight call about one weeknight per week and one weekend per month."

When asked what he likes about the job and working at TCRHCC, he said, "I enjoy the patients and the staff. The patients are nearly all-Native Americans and we have the spectrum of very traditional to completely acculturated patients. The staff are like minded and easy to work with, we have a collegial group this leads to some very long provider tenures for an IHS/638 site."

Next Dr. Truesdell explained what he would say to someone, particularly youth to inspire them to do what he does?

"I started out not limiting myself by what others thought or expected of me. I set my own goals and, despite setbacks, never gave up and worked hard to get what I wanted," he said. "Sometimes severe family or financial problems would arise forcing me to both work full time and go to school, but it never stopped me, only delayed me some. So if I can do it by hard work, discipline and persistence, anybody can as long as they work hard don't give up and have the backing and understanding of their family.