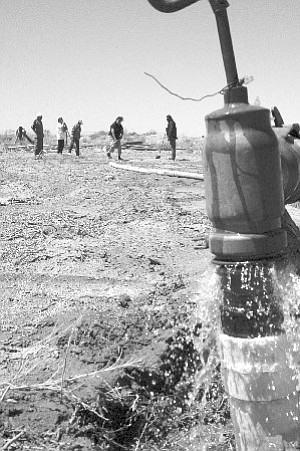 The race to grab the last of the available water in the west, in the Little Colorado River Valley in particular, has caused some traditional Native American farmers and others to scramble to try and show that people will need to use this remaining water for local sustainable agriculture before it is taken for further urban development.

"The biggest thing I keep hearing is that the government is telling the tribe that they need to be using this water or else it will end up going to someone else who has a use for it," said Justin Willey, a Navajo from Leupp, who has been farming since he was a boy raised by parents who also farmed.

Willey has been organizing for some Leupp-area families under North Luepp Farms to try and reestablish what many elders said used to be common for their people.

Jackie Thompson, an elderly Navajo who owns the 95-acre farm in Leupp known as North Leupp Farms, began farming there in 1978 under a Seventh Generation grant, but since that time the grant has dried-up and everyone else in the project gave-up except for Thompson and his wife.

"His parents were farmers in this area and used to farm just behind that sand dune over there with the tamarisks," Willey translated for Jackie.

"When I was young we would come out here to play in the Little Colorado River and there was a forest of cottonwood and the river was clear with chubs, trout and beavers."

Through the years they have struggled to keep-up their farming until Willey got involved and decided to just go for it and begin planting last year with or without anyone's help. Last year, he did find help from Northern Arizona University and this year he has also gotten help from others with the Native Movement in Flagstaff, and with other local traditional farmers in Dilkon, Tolani Lake and Sebea-Dalkai.

A group of students from NAU went out there all last week to help water, till and plant into the soil. After digging the soil, Tyron Thompson, another Navajo farmer from Leupp, showed some earth worms that he had found ‹ a good indicator of healthy soil that will sustain crops.

When the Little Colorado River was healthy, the valley around it would flood and bring in sediment to the area. The cottonwoods would then make use of the floodwaters to sustain their numbers.

Jackie said that in about 1969 or 1970, a drought came to this area and the river dried-up completely. Since that time the river has been in the condition we see it in now.

Willey said that the ecosystem could all be brought back again if the tamarisk are removed, but people would also have to bring in many backhoes to flatten around the river so the floodwaters can return to bring sediment to the area.

They could put plants back in that used to be all over like the red willow, cottonwood, poplars, greasewood, hackberry and other wild grasses, Jackie said.

Until then, these Navajo farmers said they need to be focusing on getting the Leupp farm operating at the capacity it used to before people lost interest in those ways.

"I go to ceremonies and see people talk about traditional ways while they pass out soda and store bought food that is unhealthy for us. We need to get back to our traditional foods if we are going to talk about being ceremonial," Willey said.

Much of the problem affecting native people today are the things that take them away from their traditional ways and connections to their land.

"All these tribal housing projects get our people off the land and put them into these little developed communities and that is where we are seeing the social problems arise," Willey said.

Robert Tsosie, a young Navajo organizer with the Native Movement in Flagstaff, said that it can be difficult to reach out to these new generations of Native Americans because they are mixed-up between the loss of their old culture and the new culture that comes in from television, music and bigger cities.

"Many kids now are all hooked-up with G or meth and that has become a real problem," Tsosie said. "It is important to learn about this youth culture and what works and what doesn't work," he said.

Willey explained to the NAU students that tribal members are being put in a dependency situation with the welfare checks, commodity foods and being put in the project housing on the rez. He said now after a few generations of this process, even some of the elderly have their hands out and expect things to be done for them. This is not a good example for the children he said, because it leads to many social problems.

"It would be wise to have the kids go to the sheep camp and get their food instead of being dependent and going straight to the refrigerator," Willey said. "The hard life brings physical and mental stability, while being dependent makes you weak and vulnerable to sickness."

To be an example to his community, Willey is out there everyday now, planting corn, melons, squash, root crops and leafy greens. Much of the 95-acre farm is made-up of family and community plots, an alfalfa field and an area for people to grow food for local farmer's markets.

Willey said he and others on the Leupp farms will be growing mainly for the Flagstaff Farmers' Market and community markets on the rez, but they would be interested in growing more for the Winslow community if Winslow could establish a farmers' market this year.

Before the Leupp farmers can begin to expand their operations they said they need many things. Their tractors are old and the planting machines are in disrepair. Diesel fuel that runs their water pump is expensive and they need to use a great amount of water. Water rights are a contentious issue currently between tribal communities. Willey said they biggest need is working hands.

"If we can get people out here to help us plant as much as possible by May 6 and 15, that would be great because then we can show the surrounding communities that people are still interested in healthy food and using that water to grow that food," Willey said.

Rena Tsosie, a Headstart teacher in Pinion, said that her family is interested in what Willey is trying to do. Rena and her son Robert have been farming native heirloom varieties of food for many years and are involving more and more youth every year.

"The kids do like to get involved in planting because it gets them together to where they can be somewhere to socialize. They like to have water fights and play around -‹ it is all in good fun," Rena said.

Those interested in volunteering their time or assisting North Leupp Farms with the loan of farming equipment or if you would like to offer financial assistance and receive a tax write-off, you may contact NAU representatives Laura Monti at: (928) 523-7874 or Ramona Anton-Nez at: (928) 523-0601.