U CAN 2: A pathway to a medical profession
TC Regional Health Care Corp. spotlight on pharmacist Idella Bryant 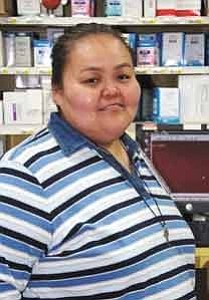 TUBA CITY -- After graduating from Tuba City High School Idella Bryant, went on to complete her bachelors of science degree in chemistry at Northern Arizona University and then completed her pharmacy degree at Midwestern University College of Pharmacy in Glendale.

Bryant started as a staff pharmacist at TCRHCC only one month after pharmacy school in 2004.

When asked what brought her back to Tuba City she said, "I always knew I would be living in Tuba City as I got older. My family lives here and I participate in many of the ceremonies. I grew up surrounded by family and owed a lot to the support they offered to me through prayers and words. While I was out trying to educate myself, my grandparents had both passed on, and I just wanted to be around my family and their house to keep me going."

Bryant said she enjoys talking to the elders in Navajo about their medications or their health conditions.

"Sometimes I know it can be difficult, but they are willing to help me when I don't know quite how to pronounce a word or two," she said.

In return, she is able educate elders about their medications in a way that is more understandable.

"It definitely gives you a sense of satisfaction, and it also allows me to give back to the community that has provided so much to me -- a real sense of family," Bryant said.

She pondered what advice she would give today's youth.

"This one is a hard one," Bryant said. "I was always lectured at every family gathering and every birthday party. My grandfather, Clark Keetso, always said 'education was the only way to go. We don't know what the future has in store for each person, but education would prepare you for what may come up."'

She said her grandfather always pointed out the importance of a permanent job.

"It did not matter how much a person made, but a permanent job could not be taken away," Bryant said. "He also lectured about keeping up with the Navajo language and the ceremonies. I remember once he said he lectured and pushed for the education but forgot to stress the importance of remembering the Navajo culture just as strongly. So I figured that was important to him."

Because of him Bryant said she tries to learn what she can even now.

"Those lectures I received would probably be the only things I could mention to the younger generation," she said.

What the job entails

What do they do? Dispense medicines according to prescriptions from doctors and dentists

Getting ahead: Retail pharmacists have relatively few chances for advancement.

Where they work: Drugstores, hospitals, HMOs, universities and drug companies

Look for work: Link to job banks and other job search resources.