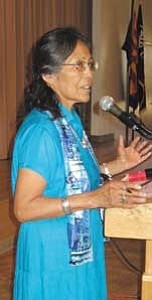 Ann Widmann/Observer Dr. Marie allen of the Navajo Nation Division of Health, discussed how obesity and diabeties can be targeted.

FLAGSTAFF -- The response was strong to "A Call to Action," the Arizona Conference to Prevent Obesity" held at Northern Arizona University's Dubois Center on April 13. Presenters shared strategies for reversing the increasing numbers of Americans suffering from obesity and diabetes.

Statistics collected by DIWH reveal that an estimated 65 percent of adult Americans are considered obese or overweight and that more than 100 million Americans have Metabolic Syndrome--only one step away from type-2 Diabetes.

By the year 2010, nearly half the children in North America will be overweight. For the first time in history, obesity-related disease is actually lowering life expectancy. Obesity affects 60 percent of Arizonans.

The conference focused strongly on obesity and diabetes issues among Native Americans within the state.

Roanhorse, the division's executive director, spoke of the efforts of "Just Move It," a walking program that Indian Health Services introduced to the Navajo Nation, which focuses on prevention..

Roanhorse also mentioned the increasing threat represented by HIV and AIDS to the Navajo Nation--both issues are impacted by the lack of resources and funding available from the Navajo Nation. This necessitates, Roanhorse said, effective collaboration with state and federal government entities.

At a "Just Move It" walk in New Mexico, four individuals who participated were over 70 years old--two ladies and two men.

"They talked about the good old days, and the importance of physical exercise and chores," Roanhorse said.

His parents were both into formal education, Roanhorse said. Land and family in a traditional setting were very important in his family.

"Parts of that lifestyle--corn, squash and beans, sheep cattle and horses were very important to me," Roanhorse said.

In the springtime and all summer I would herd sheep, and go get the horses in the early morning."

He also spoke growing up without electricity and running water--having to hike 50 yards to go to an outhouse, picking and chopping firewood to heat his home and cook.

Allen talked of the importance of addressing obesity and Diabetes within communities.

"That's where it needs to happen," Allen said.

She said that the support of family and community is very important in addressing these health issues.

"Once diagnosed, people often go back home with the recommendation of a change of diet, but the rest of the family doesn't like the good diet."

Allen also spoke of the importance of spiritual support where clinical depression sets in. Traditional healers, pastors, ministers and priests are important sources of health to families, she said.

Allen described the benefit of growing healthy food, something she pursues after work.

"It's my therapy garden," she said.

She, too, spoke of the large numbers of Americans affected by obesity and diabetes-- more than 65 million men and 65.5 million women.

Ramona Antone Nez along with Justin Willie presented the concept of Healing Gardens--a way to improve Native Health and Food Systems. Nez directs the Diabetes Prevention Education Program and Healing Gardens at NAU. Willie is a regional lead gardener, native science teacher and health educator. He is also founder of the Indigenous Permaculture Center in Leupp.

In her presentation at NAU last week and at Little Singer Community School on March 24, Nez described the earlier status of Native American tribes as "nations of health."

Members of these nations held a spiritual connection with Mother Earth, Nez said. They gathered food, planted food and saved seeds. And this, she said, was a healthier way to live.

"Life was physically demanding," Nez said. "The loss of spiritual connection with our Mother Earth and our relations is devastating. Over the past 60 years we have seen an increasing dependency on modern convenience."

As a result, one half of the adult population in some tribes exhibits diabetes, Nez said. American Indians and Alaskan Natives are almost twice as likely to be obese, she added.

These activities, Nez said, allow many people with Type II diabetes to control their blood sugar along with the use of traditional foods.

Tara Gene (the Heartbeat Physical Activity Senior Program Coordinator with the Coconino County Department of Health) encouraged conference attendees to "Eat and Play the Native Way" through the concepts of a program of the same name. It targets kindergarten through third grade students in Navajo Indian reservations schools within Coconino County. The curriculum of this program uses traditional Native American games to promote physical activity and examines changes in the Native American diet that affect health.

Gene Kimberly A. Babeu was Arizona Teacher of the Year for 2005. With a background in physical education, sports medicine, Babeu began the sports medicine programs at San Manuel and Marana High Schools, and volunteered as an emergency medical technical and athletic trainer for several youth organized sports in Tucson and southern Arizona.

Babeu teaches at Flowing Wells Junior High School in Tucson, and is the site coordinator for the award winning Skills for Success Program there that serves about 430 students in literacy, technology, robotics, recreation, weight training, hip hop dance, aviation, weight training and more.

Babeu described childhood diabetes as a "silent epidemic," and shared strategies she uses to combat problems she encounters in her work--such as childhood inactivity, poor nutritional decision making, lifelong apathy and poor classroom and testing performance.

Dr. James Galloway, MD, a cardiologist and director of the Native American Cardiology Program, is a captain in the U.S. Public Health Service and the Indian Health Service. In this position, he serves Native American patients in Arizona, Nevada and Utah. He has received numerous awards honoring his dedication and innovation in improving the cardiovascular care to Native Americans.

Galloway focused on the links between obesity, the Metabolic Syndrome and cardiovascular disease with an emphasis on Native Americans and Alaskan natives.

Mayer is a founding director of the Discovery Institute for Women's Health in Phoenix, and along with Dyer, is engaged in developing the Discovery Research Center at NAU.

The Discovery Laboratories at NAU create and advance research programs to address the most pressing healthcare problems affecting women everywhere.

Smith presented the latest in obesity research -- including the effect a woman's environment has on her weight.

Dr. Darren Vicenti, clinical director at Hopi Health Care Center and Dr. Anna K. Lewis, a coordinator there, addressed the increasing incidences of diseases associated with overweight and obesity. They shared some of the identified issues through data collection and review, and some of the initiatives recently implemented to address the overall issue of childhood obesity at Hopi -- which includes a program designed to address health issues at a grassroots level in the home.