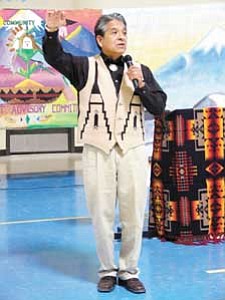 S.J. Wilson/Observer Department of Dine Education Director Leland Leonard spoke with warmth and humor to students about his life and career.

BIRD SPRINGS — “Be aggressive — chase your dreams,” Marshall Waybenais told students of Little Singer Community School on Mar. 24. “There are a lot of us out there who would like to take the easy road. The more you work, the more prepared you are to achieve your dreams.”

Waybenais is a young Navajo athlete whose dream is to be the first Native American in the National Basketball Association.

Twice a year the parent organization at Little Singer Community School puts on a parent conference that is more than just an assessment of each student’s progress. This spring’s theme aptly summed up the purpose for the conference —“Learning together with our Children for the Future.”

Waybenais joined Leland Leonard of the Navajo Nation’s Department of Dine Education as inspirational speakers for the conference at the school for kindergarten through eighth grade.

“I read somewhere that every one of us passes by 33 opportunities a day to make a million dollars,” Waybenais said. “Education is important. It teaches you to do research so that when you are out there [in the world] you will recognize your own opportunity.”

Though making it clear that he was proud of his parents, Waybenais said that he told himself that he wouldn’t be like them.

Waybenais told students that he was grateful to his father, George Waybenais — who is also the principal of Little Singer —for always having been there for him. He credited his father for improving his game up to the present.

“If you guys ever need anything, any advice as to how to be successful, ask that man right there,” Waybenais said, gesturing to his father who sat in the bleachers. “He is up to date on technique, and is still advising me.”

Broadening his scope of attention beyond the basketball court, Waybenais told students that as Native American people, tribes needed to start supporting each other.

Though being a successful professional basketball player is important to Waybenais, he told students that he has a backup plan as well. In the event that his career is cut short by injury for example, he has pursued degrees in premed and exercise science.

Waybenais concluded his presentation by advising students to “shoot for the stars,” while reminding parents and grandparents in the audience that it is never to late for them to do the same.

The nephew of three Code Talkers, Leland Leonard looked to the military as a tool to achieve his own goals. As a student he dreamed of being a Recon Ranger — which he was able to achieve through a difficult, rigorous training period. His military career allowed Leonard to attend the University of Arizona on the G.I. Bill.

Leonard was also a notable athlete and wrestled for Phoenix College.

“Yes, you do need to have good grades,” Leonard told students. “There are more barriers to success than anything else.”

Leonard told students that they needed to look to young men like Waybenais as role models.

“Forget about Michael Jordan,” he laughed. “I grew up differently than Marshall. I didn’t have a dad, but I had a terrific grandmother and mom. My mom only had an eighth-grade education, but she encouraged me to get a good education. ‘You need to be a doctor or a lawyer, Leland,’ she always told me. I couldn’t be a doctor, so I married a doctor.”

Because of his mother’s view of education and family life, he never attended a boarding school. Leonard was the first Navajo to receive a full ride to Phoenix College as a wrestler.

Later he graduated from the Marine Corps training named as the most physically fit out of 800 candidates.

“I didn’t realize I could compete like any one else—like any Black man, White man or Mexican man,” Leonard said. “Not until that day I walked up on that stage and picked up my little plaque.”

Leonard would later distinguish himself as one of the few Native American trainers at Paris Island, N.C.

After his military service, Leonard returned home to Chinle.

“I was lost. At least in the military people someone would call me out, ask for my help. But in Window Rock, no one knew my capabilities. I didn’t even have a job,” Leonard said.

He said his anger and frustration led him to continue his education. Leonard had taken courses throughout his military career and was able to enter the University of Illinois as a junior, and in that first year achieved the President’s List.

Leonard went on to a very successful life in Phoenix, but answered the call from Navajo Nation President Joe Shirley Jr. to direct the Department of Dine Education.

“When President Shirley called me, I had a good life, a nice car, a nice house. Now I don’t even have a house. That’s a little scary, but the guarantee I have in life is my education. I will always be able to find a job. I will be able to feed my children, put gas in my car.”

Leonard told students that life in the mainstream world is a lot more difficult than life on the reservation. He said that the educational reform of the Shirley administration and the creation of the Board of Dine Education is a move in the right direction.

“We are taking responsibility for the education of our children,” Leonard said. “This has never been done by any other Indian nation. We want to provide the best education possible for Dine children.”

The way that Navajo children are currently taught by mainstream education is wrong, Leonard said. The board seeks to provide Navajo youth with a culturally infused, language-rich education.

“I am honored to be part of this,” Leonard said. “I’m not originally an educator, I am a mental health professional, but I came home to help out.”

Bobby Gonnie, who teaches the sixth grade at Little Singer, expressed his appreciation of Leonard as a fellow veteran, and told students that he looked forward to seeing Waybenais out on the court with men like Laker Shaq O’Neill

“He is coming closer to being the first Native American player for the National Basketball Association,” Gonnie said.

Gonnie was also able to achieve the goal of being the most physically fit of his own Marine training cycle, and played basketball for the Marine Corps in Hawaii and Japan.

That said, Gonnie announced his amazement at the musical interest of some of his students.

“I came in to find them listening to Johnny Cash,” Gonnie said. “I told them, ‘what’s wrong with you guys?’”

The event included breakout sessions that included talking circles by Homer Jackson, a presentation on healing gardens and diabetes by Justin Willie and Ramona Nez, hogan (or home) teachings by Sylvia Jackson and No Child Left Behind information by Leland Leonard.

Melvin Tsosie, who is also the coach at Little Singer, served as emcee for the event. Etta Shirley, business manager of the school, provided the invocation. George Waybenais provided the welcome address.

Additional entertainment was provided The Three Mesas—a Hopi dance troop from the Winslow area — and Terrance Yazzie and the White River Apache Dancers.

Christina Woody, a parent from the Birdsprings community recently appointed to the school’s six-member board, delivered closing remarks.