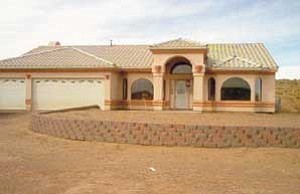 Photo by Dale Gleave Navajo Partnership for Housing provided the financing for this home, located on Navajo Nation trust land.

To the outside world, obtaining a home loan may seem like an ordinary event, even a right, for creditworthy homebuyers. In Indian Country, however, establishing access to mortgage credit can be a struggle and involves a learning curve for the tribes, lenders and Native American homebuyers.

NeighborWorks¨ America and local Neighbor-Works¨ organizations have been working concurrently with many other entities over the span of a decade to help smooth the process for Native opportunities for homeownership.

In Arizona, for example, Navajo Partnership for Housing (NPH) helped pilot the Presidential Initiative One-Stop Mortgage Center, a joint project of the U.S. Treasury Department and the U.S. Department of Housing and Urban Development.

Since its inception, NPH, with financial support from their partner the Navajo Housing Authority, has helped more than 209 Navajo families purchase or rehabilitate homes by packaging or originating 323 loans and grants totaling approximately $17.9 million, primarily on Tribal Trust Land.

In fact, mortgage lending is opening the door to greater housing choice in location, quality, and design for qualifying native families. In place of single- and double-wide mobile homes, quality manufactured housing and one- and two-story, stick-built homes provide native families with amenities once available only in off-reservation housing.

But it wasn't always so. Not so long ago, on the Navajo Nation, reservations in Montana, and most reservations throughout the United States, it was not possible for a native family to go into a bank and get a home loan on individual or tribal trust land due to the restricted nature of the land. Tribal trust land is land held in trust by the United States for the use of a specific tribe.

In 1994, the Navajo Nation Division of Economic Development and the Department of Treasury sponsored a summit in Chinle, Arizona, on the Navajo Nation. Its purpose was to encourage access to credit for business and residential purposes on the largest Indian reservation in the country. Among the participants was Eugene A. Ludwig, then Comptroller of the Currency and a member of Neighborhood Reinvestment's board of directors.

"The participation of Eugene 'Gene' Ludwig in that summit had a phenomenal impact on getting the attention of the banking community" said Rodger Boyd, Deputy Assistant Secretary for Native American Programs at HUD. "It sent a very clear signal regarding the market potential beyond commercial lending."

The Chinle Summit also spawned the creation of the Navajo Partnership for Housing, the first Neighbor - Works¨ affiliate working in Indian Country. Other initiatives and studies followed, which helped document the issues and suggest solutions. The solutions focused on three areas -- improving access to capital, building native capacity for homeownership, and removing legal barriers.

At HUD, for instance, the Section 184 loan guarantee program for Native Americans has made 2,796 loans to individuals and tribal housing authorities for more than $296 million from 1995 through 2005. Of the total, 914 were loans on tribal trust land. Federal Housing Administration Section 248 insured 16 loans between 2000 and 2005 totaling about $1.3 million.

On the development side, in 1996, the Native American Housing and Self-Determination Act

(NAHASDA) consolidated a number of Indian housing programs into an Indian housing block grant (IHBG). The IHBG is a formula grant that provides a range of affordable housing activities on Indian reservations and Indian areas. Funded at roughly $600 million a year, the program has often been used for home construction, with the goal of this construction financing being taken out with permanent mortgage loans. Additional potential exists with the Title VI Loan Guarantee section of the Act.

At the Veterans Administration, through the pilot Native American Veterans Direct Home Loan Program, 480 direct loans have been made since 1993 all on trust land. Fannie Mae offers conventional loans through the Native American Conventional Lending Initiative (NACLI) and has purchased loans covering 11,804 single- family homes on tribal lands, which include tribal trust, allotted land, and fee simple lands, totaling nearly $1.1 billion from 1995 through November 2005. These totals include HUD 184, FHA 248, USDA 502, and conventional loans.

State housing finance agencies are expanding their reach into Indian Country. The Montana Board of Housing, through support from Fannie Mae, recently announced the MyMontanaMortgage program that offers a 1 percent reduced interest rate for underserved groups such as Native

This loan production to date would not have been possible without financial institutions like Wells Fargo, Countrywide, and Washington Mutual, as well as small community banks, originating these special product and portfolio loans.

So far, 318 instructors, representing 88 different tribes, have been certified to provide the class.

To build lending skills and institutions, Treasury's CDFI Fund has contributed grants and training for Native CDFIs. It now reports 35, with the Navajo Partnership for Housing being one of those.

Many tribes now have put into place the legal infrastructure for mortgage lending, just as the Apsaalooke Nation paved the way for conventional financing through its "Financial Procedures and Protections Act."

More than 185 tribes and Alaskan villages have been approved for HUD's Section 184 loan guarantee program, indicating that they have some legal infrastructure for mortgage lending in place.

On another front, Interior's Bureau of Indian Affairs, Agriculture's Rural Development, and HUD's Office of Native American Programs have been working together to shorten the timeframe for title search reports (TSRs). The TSR process, given backlogs at Bureau of Indian Affairs offices, for an existing home, can add one to 12 months to the home buying process, depending on the region of the country.

As a result, the Bureau of Indian Affairs has established 30 days from a lender's request as the target for providing a TSR. In addition, a Section 184 HUD-guaranteed loan can then be closed based on an endorsement by the BIA Realty Officer without a new TSR saving time.

In several models, tribes have contracted with the BIA to assume part of the title search and recordation process. The Saginaw-Chippewa Tribe in Michigan, for example, reports that setting up its own tribal leasehold recording office has contributed to its ability to sell $60 million in loans to Fannie Mae.

The Confederated Salish and Kootenai Tribes in Montana, which have assumed title search and

recordation functions from the BIA, receive 10 to 15 title search requests a day. Control over this function has helped them originate 70 Section 184 loans in the past 24 months.

For all the gains, challenges still remain. They include addressing the physical and legal infrastructures on tribal lands, building the capacity of local intermediaries (be they tribal housing authorities, nonprofits, or CDFIs), continuing to streamline the lending process, adjusting cost expectations of the native homebuyer, and safeguarding against predatory lending.

Even though significant, these challenges should not overshadow the great accomplishments that have been achieved. And these accomplishments are key building blocks for enhancing Native opportunities to achieve the American dream of homeownership.

For more information on building, renovating, or financing a home, please contact Ernie Little at: 928-645-2384 or ernielittle@citlink.net.(Steven Barbier is a management consultant with NeighborWorks America and can be reached at sbarbier@nw.org. This article was reprinted with Permission from NeighborWorks¨Bright Ideas, the quarterly magazine of NeighborWorks America.)