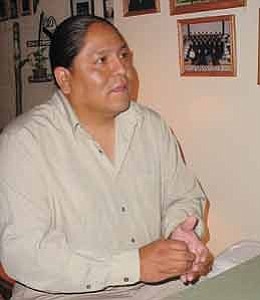 FLAGSTAFF -- Kelvin Long, longtime Flag resident and activist, oversees a program designed with his community in mind. ECHOES, Educating Communities while Healing and Offering Environmental Support, is an organization that focuses on uniting urban youth with elders for support and guidance.

Long pointed out ECHOES' goal is to is to establish a permanent community center where urban youth and elders from on and off the reservation can come to share stories, provide guidance and, most of all, lay the foundation for a place where youth can identify with their cultures.

"By developing ECHOES, it is going to truly be a place where all natives are welcome to utilize the unique resources that elders have to give to the younger generation," Long said.

"Youth, especially in the urban setting have a disadvantage of not having those resources readily available to them; this project will hopefully met that need."

Long, of the Todacheenii clan, born for the Many Goats clan, is the son of Sharlinda Mann and Melvin Long.

Long explained that his passion for seeing the urban youth of Flagstaff get community support stems from his high school days at Greyhills Academy in Tuba City. While there he joined in a national Free Leonard Peltier campaign and describes his involvement as a "reaction to the history of how the United States treats native peoples."

After that he became interested in the Save The Peaks campaign through the Sierra Club in Flagstaff, he said, mostly out of the desire to protect the identity and sanctity of his nieces' and nephews' culture and beliefs.

"I got into the Save The Peaks campaign because I was asked something very specific by someone close to me. They asked me 'Why if the Holy people live on the mountain, why is being desecrated? That single question spurred a sense of urgency in me, a sense of something must be done," ' Long said.

His current community endeavor is the 2005 Indigenous Cultural Survival Festival, an event from Oct. 8-10 to counter Columbus Day. It is a multi-day family oriented event that celebrates native peoples' survival of European contact since Columbus. It will also boost awareness for about the Save The Peaks campaign to stop artificial snowmaking on the San Francisco Peaks.

On Oct. 10, marchers will set out at 10 a.m. from the Prochnow Building Parking Lot on the NAU Campus and head to Wheeler Park across from Flagstaff City Hall. The march will be followed immediately by a press conference at city hall.

For more information regarding ECHOES or the 2005 Indigenous Cultural Survival Festival, contact Long via e-mail at spiritvoice@hotmail.com or by phone at 928-380-6182.