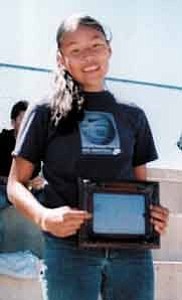 Hopi Junior High placed third in the girls race and fifth in the boys race at the cross country invitational.

Valerie Segay from Tse Ho Tso was the individual champion in the girls race. Segay said she expected to win after coming in first at the Pinon and Blue Ridge invites earlier this season.

"It was hot, but I was happy to take first and we ran well as a team," she said.

Segay, who also runs for the track team and plays basketball, maintains a B-average. Her sister Valentina runs for Window Rock High School.

She is the daughter of Francis and Gloria Segay.

John Begay from Ganado Junior High was the individual champion in the boys race.

"I was excited and happy about winning," he said. It was Begay's first championship since the sixth grade. He praised the Hopi Junior High course.

Begay said Ganado's goal was to beat Chinle Junior High, but they had to settle for second place.

Begay, who also runs track, maintains an A average. He is the son of Wanda and Alvin Begay.