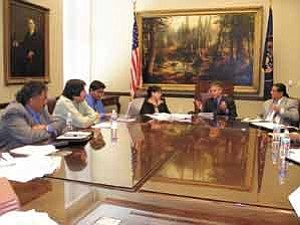 Navajo Utah Commission executive director Clarence Rockwell said that one of the main purposes of the meeting was to request that the governor commit to elevating a previous memorandum of understanding between the Navajo Nation and the state of Utah. The first MOU had been signed by then-President Albert Hale and then-Governor Michael Leavitt in 1996.

The 1996 MOU establishes a discussion group, which includes tribal and state officials or their representatives, to identify mutual issues, exchange information and discuss concerns "in an effort to reach mutually acceptable solutions."

Rockwell said such a consideration by the governor would emphasize the commitment of the new administration and possibly strengthen some of its provisions.

Governor Huntsman agreed to review a revised MOU saying, "Let's start out with realistic expectations. We share common land, resources, economy and respect for one another, and I would like to manage that more broadly than we do today."

He further asked if there was a state model that worked well for the Navajo Nation.

Speaker Morgan told the governor that the Navajo Nation has been working especially well with the State of New Mexico, noting that during Governor Bill Richardson's term there have been more Indian people appointed to state level positions than ever before and that Governor Richardson has elevated the former Office of Indian Affairs to Cabinet-level Department of Indian Affairs.

Speaker Morgan also mentioned that Arizona Governor Janet Napolitano has been holding various summits with tribal leaders, including for education and transportation, where she has invited the Navajo Nation's participation.

Forrest S. Cuch, the State of Utah Division of Indian Affairs executive director, said that the state held summits with the tribes on economic development in the past, but there had been a lack of interest due to various circumstances.

The governor suggested holding an economic development summit for tribal leaders within the next six months to see what plans are being made by the tribes and what the needs are to implement the plans.

"Governor Huntsman was very receptive to addressing the issues that were brought forth by the Navajo Nation," Speaker Morgan noted following the meeting, which was his first with the governor who took office in January 2005. "The Navajo Nation remains committed to strengthening communities, including those in the most remote parts of San Juan County. We will work with the Commission and the Navajo Chapters to address these on-going issues."