Owner of Kate's CafŽ in Tuba City moving on 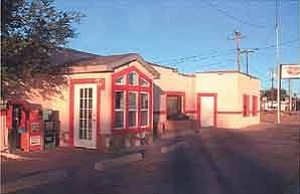 KateÕs CafŽ, located one block east of Main Street in Tuba City on Edgewater DriveÑan eating standard for just about everyone in Tuba City, is now for sale.

TUBA CITY -- It's been 14 years since the cafŽ doors opened for at Carole Lasserre Dupuy and her daughter, Kaitlyn, who was six months at the time, but has grown and is now a sophomore at Sinagua High School in Flagstaff.

Kate's CafŽ, located one block east of Main Street in Tuba City on Edgewater Drive, is an eating standard for just about everyone in Tuba City including the surrounding Hopi and Navajo reservation areas for breakfast and lunch and dinner.

Tuba City locals can name their favorite soup or daily special and there isn't a day that goes by without seeing several people you know in the crowded breakfast or lunch day hustle either leaving after eating, getting take-out or waiting to be seated.

This amazing cafŽ is constantly busy and for good reason.

The food is really, really good, homemade fresh, the atmosphere extremely warm and friendly and the prices are downright reasonable.

But the story behind the cafŽ that is now up for sale, also has a long history for Dupuy and her daughter, who are looking for that special new buyer who can love this cafŽ they have owned and been so dedicated to for so many years, the way they have.

Dupuy raised her daughter Kaiti, literally under the front cash register before she could walk and later made her a special room in the back of the cafe.

Carole was not just a full time single parent but a full time sole business owner working about 16 hours a day and Kaiti spent most of her formative years playing around the cafe where her mom could keep on eye on her while working.

As Kaiti got older, she even helped out busing and waiting tables and helping her mom cook some of the more secret Kate's CafŽ dishes, after doing her homework on one of the work counters. By age 11, Kaiti was an "experienced" waitress making her own tip money.

Their cafŽ was not just a business, it became their second home, one that was filled with good food, constant foot traffic and a supportive family work atmosphere.

So much so, that Carole has two employees, Donna Kinlichenny and Rosie Haley, who have been with her since she opened her doors 14 years ago and they are still there.

Carole likes to joke that they have seen each other through it all, "divorces, babies, dead-beat boyfriends and long shift hours."

Dupuy, originally Carole Lasserre was living in Mountain View, Calif. where she worked for a concert merchandising company in San Francisco before coming to Tuba City.

For seven years, she literally lived out of her suitcase traveling with several concert tours handling specific concert merchandise.

Over the years she was able to work with Lee Greenwood, Kenny Rogers, Chicago, Santana, Robert Palmer and Bonnie Raitt.

Two weeks before young Kaiti was born, Dupuy left this fast paced road life to search for a place to raise a family.

Dupuy then took over a cafŽ that had a very interesting Tuba City history of its very own.

The original cafŽ opened in 1946 called the Wandering Water CafŽ and with the Tuba City Trading Post, were the only two businesses open in the uptown Tuba City area.

The Wandering Water CafŽ eventually became the property of Mike and Ora Brodie who named it the Tuba City CafŽ but everyone locally just called it "Brodie's."

Then in 1950, a Mobil gas station opened up alongside the now demolished Tuba City jail.

In 1969 it was renamed the Silver Sand CafŽ.

Soon after it underwent a new lease by Tuba City locals, Buck and Marsha Griffin who renamed it, the Wagon Wheel CafŽ in 1982.

The Griffins expanded the original building structure, added some native food items to the menu, put in a Pac-Man video game machine and added the still used booths to the front counter dining area.

By now, the fast food joints like Taco Bell and McDonalds, came in along with the Hogan Motel and Restaurant, which was called Pancho's back then.

All this immediate area food competition caused a lapse in business and the Wagon Wheel shut down.

But it was revived by a group of local Tuba City investors and it was reincarnated into the Peking Gardens. But business didn't quite catch on, and that closed too.

Along comes Dupuy, who was here at the time in 1991 visiting her in-laws, Patty and Daryl Dupuy.

She had never owned a restaurant business before, but her now ex-husband talked her into it after touring the then closed down Peking Gardens building with a Coleman lantern in hand, since there was no electricity in the place.

He convinced Carole that this would be a great investment, one close to his parents who were Kaiti's grandparents, already living in Tuba City.

So they sold Carole's vintage Volkswagen Bug, emptied out their joint savings account, maxed out three credit cards to open Kate's, named after their young daughter.

But Dupuy says she never looked back and still felt it was the right decision, even though her husband dropped out of the picture two years later.

She said she felt that Tuba City was a wonderful place to raise her daughter.

It had a wholesome community feel, supportive people and a rich native atmosphere that she knew would enrich not just her life, but the life of her young daughter whom she knows will become a successful citizen of the world.

Dupuy had some prior but brief experience in the food business. When she wasn't on the road with concert tours, she waitressed, and had also catered golf tournament events at Stanford University and had taken some management courses, but she was still unsure if she could make it all work.

But she did it.

According to her meat supplier, Kate's is now the biggest client in moving the most hamburgers in the northern Arizona area.

Her special Kate's "Baja Burger" is probably one of the reasons. Its a huge all beef grilled burger, topped with fresh avocado slices, bacon and jack cheese, one of the more popular local lunch favorites.

Dupuy credits this new title of most hamburgers sold in the northern Arizona area, to keeping her food consistent and her prices affordable.

"I don't know how to do things halfway," she said. "I knew I had to work everyday, 16 -20 hours a day, if I was gonna' make this work. I would really like to find a buyer for this cafŽ who will love it like I have, someone who can keep the positive atmosphere going."

She simply doesn't want to see the restaurant close.

"I want Kate's CafŽ to still live after I sell it," Dupuy said.. "It's time for someone new to run it, someone with new ideas, full commitment, someone who will really care about this place and the community it serves.

"I am looking for a new adventure at this point in my life and I want to spend as much time as I can with my daughter before she leaves for college. It's time for a change for me and for Kaiti but I will always hold Tuba City in my heart."

Kates's CafŽ comes with all brand new kitchen equipment, the lease intact and existing for another five years, all federal ID numbers and state tax accounts, Navajo tribal utilties transferable so the new owner would literally just have to take over, with Dupuy hoping to find the right buyer by Thanksgiving of this year.

Dupuy who bought a new home for herself and her daughter in Flagstaff, financed through sheer hard work and determination. She wants to take a much deserved break and spend more time with Kaitlyn before she graduates high school.

But she won't take a long break, Dupuy is looking forward to contributing to her new Flagstaff community the same way she made a rewarding life in Tuba City for 14 years.

For more specific information about the sale or history of Kate's, call Carole Dupuy on her cell phone at 928-380-2327.