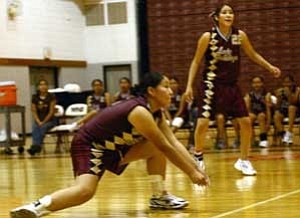 Seniors Jana Manygoats (foreground) and Arveda Yazzie are the team leaders this season for the BulldogsÕ varsity team.

The Lady Bulldogs defeated Camp Verde two games to one in the second pool play match. Winslow won the first game 15-12, lost the second by the same 15-12 score and won the decisive third game 15-7.

Sedona defeated Winslow in two games in the team's third and last game of pool play. Sedona won both games by scores of 15-13 and 15-14.

Winslow met Sedona again in the first match of losers' bracket play and lost that match in two games. Sedona won the first game 15-9 and the second 15-8.

The Lady Bulldogs defeated Holbrook two games to one in their second bracket play match. Winslow lost the first game 15-9, but rallied to win the second game 15-13 and prevailed in the decisive third game 15-10.

The Winslow High School freshman, junior varsity and varsity volleyball teams all took two games to none victories in their matches with the Greyhills Academy Lady Knights in matches played on Wednesday in Winslow.

The varsity won both games in its match by scores of 25-16 and 25-21. This was Winslow's second match against a 3A North Region opponent. The Lady Bulldogs had lost a match two games to one against Window Rock on Aug. 6 in Winslow.

The Winslow junior varsity and the Winslow freshman teams both won their matches in two games.

Winslow was scheduled to participate in the 3A East Region Invitational Tournament at Round Valley High School in Eagar on Friday and Saturday. Results will be reported in the Sept. 28 edition of The Winslow Mail.

Winslow was also slated to play a 3A North Region match against Hopi at Polacca on Tuesday. Winslow will host Tuba City on Thursday and play Greyhills again on Saturday at Tuba City.