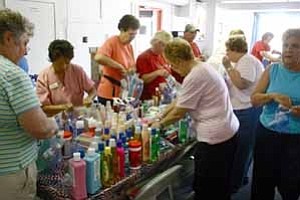 In the aftermath of Hurricane Katrina, most of the nation's emergency relief focus is on New Orleans and other heavily populated areas. But many Winslow residents want to ensure the shattered small towns receive help too.

The towns' names won't stand out on a map or receive much national media attention, but that's the point.

"A lot of people probably don't know about these small towns. We didn't want to go to places that have shelters already set up," said Bert Cole, owner of etc., etc., etc. and one of the organizers of the local relief effort.

Cole added that the response from Winslow residents has been incredible.

"Once it started to spread by word of mouth, it just took off," she said.

Several businesses around town have been collection points of everyday items to go to the victims who lost everything.

On Friday, the volunteers were frantically packaging toiletries, bottle water and cans of pop at an assembly line-like pace to ensure the packages would be shipped by UPS that day.

Cole began the effort by looking online for towns that needed help. She said she called 45 towns - each time hearing only a recorded message ­ until she finally reached a police department in Madisonville. But when she called back later, the lines were down again. She managed to make arrangements with local law enforcement in the three towns to accept the packages and distribute the items.

Rosemary Foy volunteered to help package items because she isn't able to travel to the flooded areas but still felt she needed to do something to help.

"One of the hardest things has to be the separation," she said. "To lose everything and leave home to go to another city or to be separated from your child is terrible."

This week, the local collection points accepted clothes to send to the same three towns. But Cole said she is looking for three more towns ­ one in each state affected by Katrina ­ to help out. She said the cost of the first shipment was covered, but monetary donations would be necessary for future loads.

With many of the displaced southern residents finding shelter in northern states and with summer ending, Foy said donations of winter clothing and blankets are needed along with bedding. Cole said that enough bottled water has been donated but more of the other items are still needed. Monetary donations are also still needed to purchase more supplies for infants and babies.

"Winslow is good about stuff like this," Foy said. "They never cease to amaze me."

"We'll keep it going as long as we keep getting stuff," she said.