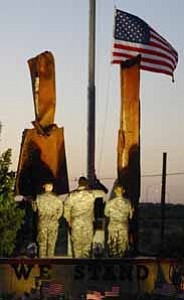 <i>Photo by Jeff Pope</i> <b>SFC Robert Powell (left), Master Sgt. John Trujillo and SFC Frank Swimmer of the Arizona Army National Guard cast large shadows on the beams at the Remembrance Garden, a symbol to remind everyone of those who serve and protect our nation. The three men from Flagstaff carried the flag raised during the fourth anniversary of 9/11 on Sunday.</b>

The fourth anniversary of the devastating human attacks on the United States was equally mourned for the victims of one of the worst natural disasters as well.

On Sunday, a couple hundred Winslow residents gathered at the Remembrance Garden to honor the heroes and victims of the terrorist attacks on Sept. 11, 2001 and pray for the displaced Americans reeling from Hurricane Katrina.

The heart of the Winslow ceremony was the changing of the American Flag by local firefighters and police officers and members of the Army National Guard from Flagstaff.

The flag and the garden share a direct connection to two of the sites of the attacks. The flag was raised over the Pentagon before it arrived in Winslow to fly over the beams from the World Trade Center towers.

Mayor Jim Boles reminded the crowd of the combined efforts of Waste Management, who saved the steel beams for the garden, Wal-Mart who provided free transport of the beams, and the Winslow community as a whole for supporting the garden.

"We had pledged, 'We shall remember. 'We will not forget.' The community just rallied as we can always depend on our community rallying. If something was needed, there it was," he said.

Chairman of the Hopi Tribe Wayne Taylor said that although the damage occurred 3,000 miles away, the tribe felt the loss at home.

"The Hopi believe it is important to live peaceful humble lives in balance with all living and non-living things. This is the pathway we refer to as the Hopi Way," he said. "And despite our believe that it is wrong to take human life, the Hopi TribeŠ has sent many of their men and women into combat in all of the wars, beginning with World War II. The tragedy of 9/11 reverberated throughout the country from New York to the plains to the tall mesas of our Hopi homeland."

While most memories of the tragic day focus on the victims, Winslow firefighter Jim Currier said it's important to remember the heroes too.

"During this chaos, many men and women jumped into immediate action, among those were law enforcement, fire protection and emergency medical communities," he said. "Without a second thought they unselfishly placed themselves in harm's way leaving their own families behind.

"This is not only a time to remember the disastrous events that have overwhelmed our nation, but a time to recognize and thank those who accepted the oath of their office and gave a promise to serve our communities with true dedication and unselfish sacrifice."

Winslow Sgt. Afton Foster added that we must not forget those men and women still fighting terrorism.

"We all owe the men and women of the United States Armed Forces, past and present, our greatest respect and gratitude," he said. "They fight for the thing that many of us take for granted every day and that's our freedom.

"The greatest injustice would be to set aside only one day out of the year to remember the tragedies brought to our shores by men of hate, by natural disaster and by armed conflict."

A couple of speakers shared their personal experiences from 9/11.

U.S. Rep. Rick Renzi said he was on his way to work at the Pentagon when it was struck and every day since he is reminded of the actual loss.

"There are 1,800 children in America who lost a mom or a dad on Sept. 11," he said. "On the football fields and the soccer fields, in the schools and churches of America there are children who today, when they wake up on this Sunday, remember the death of their parent and it is a somber day for them. It is a day of remembering a funeral and burying a loved one.

State Rep. Jack Brown recalled the effect seeing Ground Zero had on him and his wife.

"My wife and I had the opportunity to go back to New York about three years ago and we went and visited that big hole in the ground where these two big ol' beams came from. Boy, tears came to my eyes and my wife's eyes and we just spent three or four hours there going around reading all the nice things that have been said about those people," he said.

He said they also visited the site in Pennsylvania where United Airlines flight 93 crashed, calling it "hallowed ground."

"There are a lot of things we can remember starting with 9/11 and also the hurricane that brought a lot of damage to three states and the war. And all those things we have overcome and the in the future, coming together we will continue to overcome all those obstacles that are out there," he said.

Dave Hart from the Warren Avenue Church of Christ led a prayer for the victims of 9/11 and Hurricane Katrina and to bless the soldiers fighting overseas.

The Winslow High School band provided patriotic music throughout the ceremony. Brenda and Mary Alice Hayes lent their voices to "God Bless America" and in leading the crowd in the National Anthem.

Five candles were lit at the base of the steel beams to represent the branches of military service. Larrilyn and Rick Stell lit the candle for the National Guard, Betty Jean Peterson lit one for the U.S. Air Force, Steven Rogers for the Marine Corps, George and Sandra Vasquez for the Navy and Melissa Robertson for the Army.

Judi Gill read a list of those from Winslow serving in the Armed Forces. Dale Hancock concluded the ceremony with a prayer.