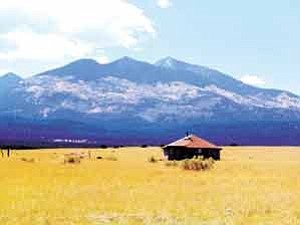 Photo by George Hardeen Navajos view the San Francisco Peaks as the residence of Holy People who have influenced, guided and supported them for centuries. The Navajo also view the misuse of the peaks as a gross sacrilege.

PRESCOTT -- The precedent-setting federal trial to prevent the desecration of Dook'o'osliid was recessed last Tuesday (Oct. 18) until Nov. 2 when Navajo Nation President Joe Shirley Jr. is expected to testify.

The trial, Navajo Nation et al vs. the U.S. Forest Service, recessed after its fourth day and two days of oral arguments on Oct. 6 and 7 on a cross motion for summary judgment.

Shirley attended the trial here on Oct. 17 and 18, and was prepared to testify.

Last March, Coconino National Forest Supervisor Nora Rasure approved a plan to allow the Arizona Snowbowl to expand its ski resort and use reclaimed wastewater to make artificial snow. To Navajos, the use of reclaimed wastewater on one of its four sacred mountains is an outrageous desecration of a holy site.

The nation holds that the Forest Service's decision violates the Religious Freedom Restoration Act, which prohibits government from burdening a person's exercise of religion, and that it did not comply with the National Environmental Policy Act.

Attorney Howard Shanker is representing three of the six Native Nations suing the Forest Service including the Navajo Nation, White Mountain Apache Tribe and Yavapai-Apache Tribe. He is also representing the Sierra Club, Center for Biological Diversity and the Flagstaff Activist Network in the case.

Also suing the Forest Service are the Hopi, Havasupai and Hualapai tribes, which have their own attorneys.

Shanker said this is the first time a lawsuit has been brought that tests the Religious Freedom Restoration Act of 2000 as it applies to Native American religions or cultures.

"This is the first case where the application of RFRA, as amended (by the Religious Land Use and Institutionalized Person Act), is being applied in the context of Native American religious beliefs," he said.

The first Navajo to testify was Steven Begay, a medicine man who also works for the Navajo Nation Historic Preservation Office. He testified about the spiritual significance of the Peaks to Navajos and how permitting the project to proceed will impact them.

Begay testified that the proposed project would "significantly impact

Navajo life" by contaminating an environment considered pristine by Navajos.

Ramon Riley, Cultural Resources Officer for the White Mountain Apache Tribe, said if allowed to proceed the project would have a negative impact on the Apache way of life.

"It would probably destroy our people, our way of life," he said. "Our prayers are not going to be strong."

"If you want to call it a religion, that's your language," Randall said. "It's a way of life.

He said the proposed project would have a devastating impact on native people.

"It would make the holy place impotent," Randall said. "Once something is desecrated and the essence of God leaves that holy place, it is no longer powerful as an intermediary to God Himself."

Historically, the Navajo Nation has defined its national boundary according to spiritual tradition, which places the San Francisco Peaks as a geographic cornerstone and spiritual monument. The peaks have served as a place of pilgrimage, inspiration and spiritual protection for Navajo people over centuries.

The Navajo Nation has expressed deep concern over the lack of adequate tribal consultation on the part of governmental and commercial interests involved in expanding commercial activity on the San Francisco Peaks.

The Navajo people as a whole reject further commercial exploitation of the San Francisco Peaks and, in particular, strongly object to the outrageous and profane violation of the sanctity of this holy place as envisioned by commercial interests.