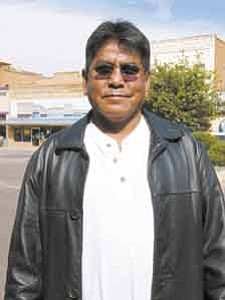 WINSLOW -- It was less than two years ago that Robert Carr, a Navajo resident of Winslow since 1989, ran against Winslow Mayor Jim Boles. Although Boles was elected to another term as mayor, Carr made an impressive showing as a write-in candidate for that office.

Due to the recent recall of several key city employees including Boles, the city is forced to hold a special election on Nov. 8. Once again Carr is running as a write-in candidate for the office of mayor.

Carr spoke to The Observer during a candid interview on Oct. 21 at the Winslow Public Library.

"I love to be the underdog," Carr said when asked why he had chosen to once again run as a write-in candidate. "I haven't rented billboards or put up signs. I'm making myself available to the public. People recognize me and know who I am. I hate the word 'politician.' I am not a politician," Carr said. "I am a public servant."

That, he has proven. Indeed, Carr is well known in Winslow, having served that community in various capacities throughout the years. He has been a counselor with both Winslow Counseling Services and the Winslow Guidance Association. He has worked as as community relations director for the city and as a public relations director under Mike King for Winslow Memorial Hospital.

When asked what his goals would be as mayor, Carr said that first and foremost, he would like to see a new government within the city administration.

Winslow, Carr pointed out, is a city with a diverse ethnic background--one where so-called minority populations make up a large part of the city. Carr added that he believes that at least 85 percent of the city's income comes from nearby reservations.

Carr feels that without the injection of some new faces in city government the stigma many minority citizens feel may be perpetuated into the future. He insists that it is important to recognize the uniqueness that Navajo, Hopi, Hispanic and Black populations add to the city.

Carr used the future Super Wal-Mart as an illustration.

"People are concerned and worried about the Wal-Mart. My opinion is that whether the small businesses like it or not, Wal-Mart is coming, and they will have to be competitive. Winslow business can be improved by concentrating on the minority cultures here in Winslow. What Wal-Mart doesn't have is the cultural injection.

"Winslow needs to capitalize on the native and other minority assets within its community."

Carr was referrig to the New Mexico city of Gallup.

"Gallup has improved dominant society-minority relations dramatically," Carr said. "I give them credit for that. That have different Memorandums of Agreement and Memorandums of Understanding with different tribes and representatives meet monthly to discuss any concerns."

Carr said that he would undertake an in-depth study to improve the relationship between Winslow and the local tribes.

"The city has done well to improve down town," Carr said. "But there is a need to improve Coopertown and the Southside as well."

Further, Carr said that he would look towards attracting business--including Navajo and Hopi enterprises--to Winslow.

Another topic that Carr has been passionate about is the situation Winslow refers to as the "intoxicated street people."

"I am so disappointed that the city is willing to spend $300,000 on an animal shelter as opposed to a homeless shelter, something I've long been asking for. I don't get the picture," Carr said. As a counselor and advocate, Carr has been working with intoxicated street people, trying to make a difference in their lives.

"Native Americans are not the only alcoholics in this town," Carr said. "They did not come here to be street people. Many came looking for work and were unable to find it. They were unable to obtain rides home. They get tired, they get angry, and some turn to alcohol."

Carr said he believes that through cultural sensitivity, the perception of Native Americans as being alcoholics can be improved--and that as mayor he would serve as a role model and source of self-esteem.

There is talk of Winslow being a town of prejudice, and Carr said that he has himself faced that on occasion--but that it is something he has chosen to overlook.

"I didn't know what prejudice was until I went to school in Flagstaff. And for some time I believed the things [I heard.] But I came to understand that I could use the negative things that have happened to me in my life for the good. I turned my life around. I learned to do the very best I could every day and at the end of the day I say that I've done my job as an individual despite the color of my skin--whether that be red, black, yellow, white or green."

"Deep in my heart, I feel this drive. I feel that I can make that difference," Carr said.

Carr refuses to deliver derogatory or judgmental statements about his opponents.

"I have no desire to drag them through the mud. I respect them. I believe they did the best they could, but I believe I can make the difference for Winslow.

Carr stressed that whatever happens in November, he cannot lose.

"I am a winner and I am happy. Life has taught me to be humble every day, to hunger for wisdom, to understand knowledge and education. I have always been an ambitious person."

Carr believes that he has many supporters in and outside the community, but credits his children for being his biggest.

"My daughters came to me and said, 'Dad, do you remember what you told us. You are not a quitter. You are a Carr and Carrs are not quitters.'"

Their encouragement kept him on the campaign trail.

"I have been endorsed by James and Ernie (the noted Navajo comedy duo of James Junes and Ernest Tsosie III)," Carr said with a smile. "I've received calls of support and encouragement from the Shoshone-Bannock and Blackfeet Nations in Idaho, and the Chippewa and Cree people of Montana.

Carr also recognized his campaign manager, Rayjean Kootswatewa of the Hopi Tribe, for her untiring support.

In order to attain the office of mayor, Carr said he would rely on the minority voice to help him make the difference.

"In the last election, half of the folks who voted for me were Anglo," Carr said. "But individuals of color need to understand the concept of how important one vote can be. As minorities we need to break the barrier -- we need to compete. I encourage Native Americans and other minorities to combine together, to stand with one voice to become equal partners in this community."

(EDITOR'S NOTE: Jim Boles and Alan Affeldt, owner of the La Posada Hotel and other properties in Winslow, are also running for the office of Mayor in Winslow.)