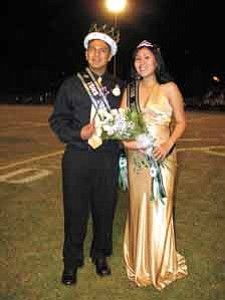 TUBA CITY -- Homecoming week is an event the entire town supports, blanketing Tuba City in forest green--the color of Tuba City High School. Fifty years of Warrior pride is evinced by an "ocean of green" spread across sports posters, students, staff as well as community members, dominating the field and bleachers on parade and game day.

The O'Connors have continually supported Tuba City Unified District School activities, and all of their children attend the TC schools. In addition, Ann O'Connor organizes each year's events at St. Jude's Soup Kitchen as well as the annual Thanksgiving Day public feast. The couple are steady supporters at each Warrior sports event, even though both have heavy schedules including making rounds at the hospital in their individual medical capacities.

Ann O'Connor is a physical therapist and her husband, a general practitioner. They have lived and worked with their children in the Tuba City area for more than 20 years.

Adding to this year's homecoming festivities was the final varsity football score of Tuba City 54 to Window Rock --0 on Sept. 23.

TC Head Football Coach Bryan Tate has an outstanding team working for him this year, which was evident in the blowout win at the homecoming game.

For more information about any of the seven Tuba City Schools, call the Office of Tuba City District Public Relations, at 928-283-1072.