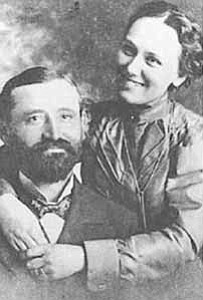 It all started with the birth of Frederick William (Friedrich Wilhelm) Volz (Prussia, 1856), the formation of The Atlantic & Pacific Railroad Company (A&PRR), and the 1866 Congressional Land Grant Charter allowing the construction of a transcontinental railroad from Springfield, Mo., to the Pacific Coast. The charter included, among other vague geographical route information, a route for the railroad across northern New Mexico and Arizona Territories described as "... more or less along the 35th parallel ...". Winslow and Canyon Diablo are more or less along the 35th parallel.

The A&PRR was purchased at a bankruptcy auction in 1876 by the Saint Louis & San Francisco Railroad (StL&SFRY, known as the FRISCO). The Seligman Brothers ( yes, Jesse Seligman, the namesake of Seligman, Arizona Territory) had formed the FRISCO for the sole purpose of acquiring the A&PRR.

On January 31, 1880, The Tripartite Agreement was signed by the A&PRR, the StL&SFRY, and the Atchison, Topeka, & Santa Fe Rail Road (AT&SF), giving fifty percent ownership of the A&PRR to the AT&SF, and subdividing the A&PRR, into three divisions. The Western Division began at the Rio Grande River, New Mexico Territory, that is to say Albuquerque, and extended to the Pacific Coast. Grading crews for the Atlantic & Pacific Railroad Company, Western Division (A&PRRWD) began at what is today known as Isleta, NM during April 1880. Rail was laid through Winslow on or about December 3, 1881, and railhead was established at Cañon Diablo December 19, 1881.

Well ahead of the track crews, probably as early as 1880, the railroad had prepositioned crews of stone cutters and masons along the Right-of-Way to construct stone foundations for the railroad bridges necessary to cross rivers and canyons. One such crew was prepositioned at Cañon Diablo to construct masonry foundations necessary for the first viaduct to cross the cañon. The Spanish spelling cañon was used until 1902 when the railroad changed to the English spelling canyon. No doubt when railhead was established at Cañon Diablo, trains bringing the iron bridge superstructure to the site were already on the way. The viaduct was erected and opened to rail traffic July 1, 1882. Along with the railroad crews came Charles H. Algert as the A&P Agent. Seeing a need for a mercantile operation, Algert opened a small trading post, operating out of a boxcar. With the opening of the bridge to rail traffic the crews moved west, as did any camp followers that might have lingered at Cañon Diablo. Algert resigned from the railroad and became a Navajo trader at Cañon Diablo. Fred W. Volz bought the trading post from Algert in 1886 and expanded the operation. Volz operated the Volz Trading Post until 1910, when he and his family returned to Seneca, Mo., near his wife's family home in Wyandotte, Oklahoma.

In 1876, Frederick William Volz, the eldest of the six children of Hermann and Julianne Volz, left Prussia with forged papers and entered the United States via New Orleans, Louisiana. According to family lore, he sent the papers back to Prussia, and in 1880, his brother Walter (Waldemar) E. Volz, and in 1881, his brother William (Wilhelm) Augustus Volz, used the same forged papers to enter the United States. The family has William's naturalization papers, which support the New Orleans entry story.

According to E. Sue Volz, the granddaughter of F. W. Volz, Fred left for Arizona because he felt his questionable entry into the U.S. would less likely be questioned in Arizona, where he had the opportunity to open a trading post. At some point we know that both Walter and William joined him. The Volz brothers ran a string of trading posts and also had a freight business. Several teams of mules were hooked to several wagons, like a train. The brothers were some of the first white men to see Meteor Crater in Arizona; they explored, researched the crater, and contacted eastern colleges to tell of the find. They hauled drilling equipment to the site to aid scientists in the search for the main body of the meteorite. Fred collected the best pieces of the meteorite and sold them to museums. One fragment is at the University of Oklahoma. Bill Volz, a grandson of William A. Volz, saw it as a child and the card said it was collected by F. Volz. On March 23, 1904 , Fred loaned 5,000 lbs. of the meteorite to the Arizona Territorial Board of Managers for display at St. Louis. Fred was appointed postmaster of Cañon Diablo in 1893 according to the Arizona Champion. He was the trader longest at Cañon Diablo, from 18861910.

Walter, the middle brother, did not stay long in Arizona and ended up marrying a German girl residing in Milwaukee. They soon moved to Chicago and there spent the remainder of their lives. Although Walter and Margarethe Eidelloth had two children by 1893 the only record found of their marriage is January 3, 1893. Margarethe was a devout Roman Catholic. Walter never converted, but all four of their children were raised Catholic. Eleanor was born in 1891, George followed in 1893, Harry in 1900, and Margaret in 1903. Eleanor, Katherine Maystadt's grandmother, married and had two sons. Harry and his wife Rose, along with their married daughter Janet Hein, her husband Jon, and two children moved to Arizona. Walter worked as a bartender in a saloon, a cigar manufacturer in a shop, and later in his life, he worked as a zookeeper at Lincoln Park Zoo in Chicago. Walter was there when "Bushman" arrived from Africa and while the zoo hosted a Giant Panda from China.

"Bushman" was a coast gorilla from the French Cameroon, Africa, raised from a baby by Dr. W. C. Johnson, a missionary at Yaounde. He arrived at the Chicago Lincoln Park Zoo in 1930, at which time he weighed but 38 pounds. "Bushman" at his prime stood 6 feet 2 inches, weighed 550 pounds.

William A. Volz, like his eldest brother, Fred, met his wife in Arizona. Ella Sturm had attended the Indian School in Carlisle, PA, at the same time as Jim Thorpe. She trained as a nurse and went to Arizona to teach nursing skills to the Navajos. Ella Sturm was half Caddo Indian; her father was a wellknown German immigrant, J. J. Sturm, her mother, Sunwit, a fullblood Caddo Indian. They married sometime in 1903 when William was 43, Ella just 23. While on a trip back to Oklahoma to visit her relatives, Ella asked William to hook up a buggy because she had something to show him. The "something" Ella showed him was a grassy valley with a treelined creek running through the middle. William said "If I had land like this I would live on it and farm it the rest of my life." Ella said, "Well, you can have this, it belongs to me." It was her 160 acre allotment as a member of the Caddo tribe. He sold out his interest in the Arizona property, they moved to Oklahoma; and he was a successful farmer there until he died July 2, 1918. Ella and William had eight children: Walter James, Emily Rowena, Jessie (died at the age of 12), Ralph Buckles, Forrest, Norman, Julius Herman, and Constance Wilhelmina. Walter James married and had two sons, Emily and Norman each married, but had no children. Ralph married, had a stepson, and two sons. Constance married an exchange student from Venezuela, and had one daughter. They divorced when he decided to return home.

F. W. Volz married later in his life, and married for love. Josephine Mary Lofland (1/8 Wyandotte Indian herself) was a teacher to Navajo Indian children in the area of Cañon Diablo, most likely Leupp. Just before she was going to return to Oklahoma at the end of the school year, Fred walked up to her and told her he was going to marry her. He told her he planned to marry her and that she should return home, and in six months he would come for her. Her family teased her unmercifully. She did not hear from him during those six months but on the exact day he stated he would be in Oklahoma to get her, he appeared. They married in Neosho, Missouri on October 12, 1898. He was 42, she was 24. They had six children: Julia, Jeanette, Frederick Rudolph, Caroline (Carrie), Louis, and John Herman. Of the six children, only Carrie and Louis married and had children. Carrie had two daughters and one son; Louis had six children: Evalyn Sue Volz Jarvis, Freddie Louis Volz, Marian Joyce Volz Eagan, Josephine Mary Volz Bowman, Pamela Rae Volz, and LeRoy Allen Volz. Freddie and Marian Joyce are both deceased.

"My father, Richard G. Klaw, spoke often of his Uncle Fred (really his Great Uncle Fred), and told us how he and his brother Paul had played with Indian blankets and other treasures until they fell apart," according to Katherine Maystadt . "Imagine my surprise after my father's death when I discovered that Fred had died years before my father was born. I guess Fred was one of those larger than life figures. Before my father's death he did an interlibrary loan, and showed me the Burton Holmes Travel Guide Volume 12 that devoted several pages to Fred and his trading posts. Later, I found mention of Fred in "Indian Traders" by Frank McNitt, "A Drink for the Dead" and "Two Guns Arizona" both by Gladwell Richardson, and "Arizona Sketches" by Joseph A. Munk, M.D."

Archives of the AT&SFRy collection of the Winslow Historical Society indicate the Volz Trading Post remained open as late as 1931. Apparently upon the Volz family departure from Cañon Diablo in 1910 the trading post was leased to the Babbitt Brothers until ca. 1923. Thereafter, the trading post was leased to Lorenzo Hubbell until as late as 1931. At least for the time being, the paper trail on the Volz Trading Post fades into history. Perhaps a research project for another day.

Last week members of the Volz family from all over the United States visited the Phoenix Heard Museum to view part of Fred W. Volz's Kachina collection which are included in an exhibition entitled "Home: Native Peoples in the Southwest". This exhibit focuses on cultures from the southwest regions and includes pottery, paintings, jewelry and many other objects from numerous donors and time periods. This is Heard's signature exhibition that opened 22 May 2005. The Volz Kachinas are credited under the name "Fred Harvey Fine Arts Collection". Originally the collection was purchased from Fred by the Fred Harvey Company in 1901 for display at the soon to be opened Alvarado Harvey House Hotel in Albuquerque, New Mexico Territory. The collection was later donated to the Heard Museum.

This past weekend, at the invitation of the Winslow Historical Society, twelve members of the family came to Winslow, visited the La Posada Hotel and took a tour of the Volz Trading Post ruins at Canyon Diablo conducted by George F. Shaw.

Archives of the AT&SFRy collection of the Winslow Historical Society indicate a small parcel of land in the northeast corner of Canyon Diablo station grounds was leased to one D. E. Jacobs from April 1937 until December 1958, where apparently he built and operated a small trading post, separate and distinct from the Volz Trading Post. This structure was a small white two story house which burned a few years ago. Beginning in March of 1964 and until February 1974 Tipton and Irene Walters, and then David J. or Aleene Branch leased portions of the Canyon Diablo station grounds for undisclosed purposes. Anyone having information regarding the Jacobs, Walters or Branch operations at Canyon Diablo please contact George F. Shaw at (318) 780-5207, volunteer archivist for the Historical Society.