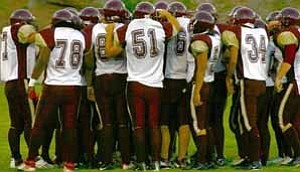 <i>Photo from archives</i><b>The Winslow Bulldogs are on a roll with another win last week. The team defeated the Ganado Hornets, 42-0.</b>

The Bulldogs had a 60 yard punt return for an apparent touchdown by Johnny Butler erased by a penalty, but drove 50 yards to score. Butler ran the final eight yards and Kyle Holland booted the conversion that gave Winslow a 7-0 lead with 8:12 to play in the first quarter.

Mark Armao scored from eight yards out to cap a 35 yard drive on Winslow's next possession. The conversion gave the Bulldogs a 14-0 lead with 4:12 left in the quarter.

Armao ran 45 yards to cap a 58 yard drive with 31 seconds left on Winslow's next possession. The conversion failed and the Bulldogs led 20-0 at the end of the first period.

Gilbert Romero scored on a two yard run on Winslow's next possession. The play capped a 66 yard drive and gave the Bulldogs a 27-0 lead after the conversion with 6:08 left in the half.

Jordan Payne ran eight yards and Holland passed to Armao for a two point conversion and a 35-0 Winslow lead with 2:56 left in the half.

The Bulldogs drove 65 yards to begin the second half and scored on a 12 yard pass from Art Gonzales to Butler. The conversion gave Winslow its 42-0 lead with 7:30 left in the third quarter. There was to be no more scoring in the contest.

The Bulldogs will close out the regular season by hosting the Window Rock Scouts on Friday at 7 p.m. Winslow will host a first round play-off game against a team from 3A West Region at 7 p.m. on Nov. 4.