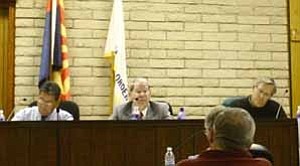 During the candidate forum last Wednesday night, Mediator Sarah Smithson asked a series of questions of the five candidates in the recall election slated Nov. 8. Those running for the council seat include Judy Howell and Stephanie Lugo, and those vying for mayor include Jim Boles, Allen Affeldt and Robert Carr.

Each candidate was given two minutes to answer each question, beginning with a two minute opening statement on "What is your vision for the City of Winslow."

Affeldt: "I believe Winslow could be much more than it is today. I think there has been a lot of progress in the last few years, and also that we've lost a great deal of momentum. I think that government is important and that government matters. The decisions that the council and mayor make every day will have a lasting impact on you and all you have to do to understand that is go to other communities. Some communities like Kingman have grown like wildflowers in the last few years, and other communities like Holbrook have died. The question for us if we're elected as mayor or council is what are we going to be? Are we going to elect people with competence, ability and vision, to make sure that the community grows, or are we simply going to accept things as they are and assume they will never be any better? I believe that Winslow can be a very beautiful and prosperous community. I know it can be that way because this is a town full of talented and creative people. And it's easy to see what happens when those people's talents are unleashed in the last few years. Many, many buildings have been beautified and fixed up and many businesses reopened. I believe I can have the direction more widely in the community and we can be a much more inclusive community. And I would appreciate your vote."

Boles: "I'm the current mayor. I'm an old head in Winslow, having spent 31 years in your school system here, and coming here about five years before that to work on the railroad, and one stint with the city prior to that. My vision for Winslow is that, first of all, it be a great place to live. It has been my goal with everything I've done since I've been mayor, even if we never have another person move to Winslow, so that the quality of life of those people who are here is improved. We have redone every street, we have redone the water system and the sewer system, so that we can accommodate growth, but at the same time, we can make life better for those that already live here. I know that there are improvements that can be made, and there are improvements that have been made. But they are generally not made overnight, and many times some of the decisions that have to be made, and some of the things that have to take place, may be decisions from people who do not live in the City of Winslow. So it has been my goal, and my promise to do two things for you, I would work for you full time and I would give you my best shot, whatever that might be. Working for you full time, I have been able to make contacts that I think are working and will work to our advantage in the future. My goal is to keep this the great little city, plus the growth that will come to natural fruition."

Carr: "I moved here back in 1989 and I call this my home. I tried moving to Las Vegas, Nev., tried moving to Chicago, Ill. I came back. All my kids went to school here, and they all graduated from here. We call it home. I love Winslow and the vision I have for Winslow is that in the near future I see Winslow thriving. Economically speaking, people will be able to shop locally, where the money will be spent, where the money will be made here. The only way to do that is, we all have to work together. The tourist attractions we have here need to grow. Every year we have certain special events that take place here. What I would like the people to see, the tourists coming here every year and to go as they please. They come here every year now to attend annual events and to consider that Winslow is their second home. I would like to see all the young kids be able to play at local parks, having a good time, while the kids will not be out after 9 o'clock, out on the streets, committing crimes. We can, to sum this up, the people here I speak to you, this is your town."

Howell: "When we moved here in 1976, Winslow was an active, prosperous little town. One of the reasons we chose Winslow was because it had the location of some of the best schools in the state, and the people were super, super helpful. And people I would like to see that happen to Winslow again. I think Winslow has great growth potential, but I would like to see it keep as a small town, not a big city, and I think in doing that we can do this by developing plans for Winslow that will promote Winslow, the clean air, the healthy water supply that we and also our natural resources, such as Clear Creek. With a little bit of a plan from the city, Clear Creek could be developed and promoted as an RV and camping site, with fishing and boating and with family activities. It could be open for six or seven months of the year. We could also promote the historical downtown in Winslow, our historical homes in town could be a walking tour, but I think we have to get out and promote Winslow and everything that Winslow stands for. One of the best things we can promote is the friendly atmosphere of the community."

Lugo: I was born and raised here in Winslow. In fact, it was a little depressing to see that building taken down, I was born in that hospital. I went to high school here. My vision for Winslow, I came back to Winslow after spending almost 20 years down in Phoenix. I want Winslow back to the positive little town, and I say little, I don't necessarily mean little town, but town that I grew up in. It was a wonderful place to be, a very positive atmosphere, maybe it was because I was a young child, I didn't realize there were some issues going on in government, but I would like to see a positive growth in Winslow. I don't necessarily want it to just grow by leaps and bounds, without having a vision for that growth to take place. There's several things here in town that need to be worked on, not necessarily improved, but worked on. I think everyone of us, every one in this room and the rest of the 10,000 people that are residents in the community, could help with that. We have Clear Creek, we have La Posada, everything that anybody could want to come to this town. I would love to see it grow and be back to the town it was when I left in 1981."

The following questions were also asked of the candidates. Their answers will be run in the Oct. 26 edition of the Winslow Mail.

* What would be your solution for Winslow's street people problem?

* Much must be done to beautify Winslow. How would you address the problem of the many dilapidated buildings and vacant lots in our city?

* For Winslow to prosper, there must be jobs. How would you attract businesses to Winslow? How would you promote financial growth?

* What would be your plan for reducing drug use among our young people and reducing petty crime in order to make Winslow a safer and better place to live?

* Why do you believe you are the candidate of choice for the position for which you are running?