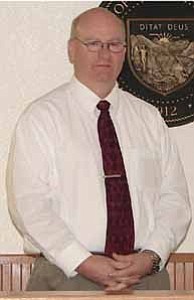 Navajo County Superior Court is getting ever closer to having a permanent Division IV.

"The governor has approved it, now the county attorney's office is working on getting clearance from the Department of Justice," Presiding Superior Court Judge Dale Nielson explained.

The Navajo County Board of Supervisors previously approved a temporary Division IV, and appointed Judge Michala Ruechel to preside over the newly created division. The board also approved the creation of a permanent Division IV beginning January 1, 2007. The permanent creation required the approval of the governor, as well as the Department of Justice.

"The voters act requires that when a new elected position is created, it must have approval by the Department of Justice," Nielson said.

The county attorney's office is still waiting for official approval from the Department of Justice, but no problems are anticipated.

A brand new courtroom for the division has already been created from the area where the county law library was once housed. It includes beaded wood paneling and a large wood paneled bench. The new courtroom also utilizes a new digital voice recording system, eliminating the need for a court reporter.

Nielson noted that for criminal cases a court reporter will still be necessary, but the digital recorder can be used for all civil cases. The system records court proceedings on compact discs, which are easily stored. If necessary, discs can later be accessed by a court reporter to create a written transcript.

The matter of who will preside over the permanent Division IV has not yet been decided. The governor has the authority to appoint someone to the position, but it is possible that she may waive that authority and allow the voters to elect a candidate in the November 2006 elections since the position will not actually be filled until January 2007.

"I don't know what the governor intends to do, but starting in January 2007 we will have a Division IV," Nielson remarked.