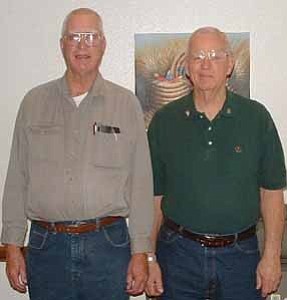 Although the two resemble one another, and were often mistooken, Sam Conner and Dan Harrison are not related. Harrison and his wife are now volunteer dog trainers of guide dogs for Southeaster Guide Dogs, Inc.

Dan Harrison and I go back to when I first came to Winslow in 1961. We had never met when a lady came up to me in the parking lot of the old Babbitt's shopping center. She spoke as if we were old friends and started talking about people who were strangers to me.

When I finally asked whom she thought I was, she said, "Aren't you Dan Harrison?" It was the first of many times I was mistaken for Dan.

Dan Harrison and I did eventually meet and become friends. I never thought we looked that much alike. We were about the same height, a little over six feet tall. Our weight was similar and we both wore glasses and wore our blond hair in a crew cut.

The event that convinced me that the resemblance was closer than that came when Dan's father mistook me for him in the old Ross' Drug Store. That was not long after Dan joined the army where he served for 22 years until his retirement in 1983.

Dan returned to Winslow for the reunion of his Winslow High School class of 1955. He played football and track while at WHS. Dan stayed to speak to the Winslow Sunrise Lions Club on Wednesday. He and his wife, Helen, are volunteer trainers of guide dogs for Southeastern Guide Dogs, Inc.

The Harrisons became volunteer trainers in August 1995 after Dan called an 800 number after seeing a television advertisement seeking such volunteers. The couple has raised 12 such dogs and remained in close contact with the dogs and the blind persons who use them. They consider their work a very rewarding experience.

Harrison said that the estimated cost of raising and training a guide dog from birth to retirement is $27, 000. He said that a guide dog probably costs more than a car. On the other hand, these dogs can do things no car can, and more than a few have saved their human charge's life.

Dogs at Southeastern Guide Dogs are trained to assist persons who have additional handicaps besides their blindness. These dogs can be trained to direct a person in a wheel chair, to open doors for people and to perform any manner of task necessary to meet the needs of their person. As a person's needs change, the dog may return to the school for additional training.

The work of volunteers like Dan and Helen Harrison has made it possible for many blind and handicapped persons to lead their lives in greater comfort and safety and to do things they could not possibly hope to do without the assistance of their well trained guide dog companions.

Dan Harrison served his country well during 22 years of military service and is still serving in a different but equally important capacity.