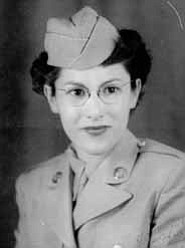 On Saturday, Oct. 1, Winslow resident Nora Wright passed away. She left these words:

"I was born in Winslow and went to grade school and junior high school here. I would probably have attended high school here, too, but after I went to the barbershop one day and got my hair cut just like my brother's, my mother decided I needed to learn how to be a lady and sent me off to a girls' school in California.

"After I finished school, I came back to Winslow to be near my parents. In 1944 I enlisted in the Army, and they told me that I was the first woman from Navajo County to join up. I took my basic training and nurses' training at Ft. Oglethorpe, Ga. After that they sent me to Fort Dix, N.J. I worked there and at Bellevue Hospital in New York City, then was stationed at Walter Reed Army Hospital in Washington. I soon learned not to get too attached to our patients; we lost so many of our young soldiers!

"From Washington I was transferred to Ft. Bliss, Texas, then I went to Pasadena, Calif., where I completed my tour of duty. A lot of movie stars visited the wards in California, and I really enjoyed meeting them.

"After my discharge in 1947 I stayed in California for a while, then I came back to Winslow and married Dr. M.G. Wright. I worked in the office of the Nancy Wright Clinic in the mid-fifties, but the horrible things I saw during the war had turned me away from nursing; I just couldn't do it anymore.

"In later years, after Doctor had passed on and my boys had left home, I enjoyed watching the sons and nephews of Roy Lawrence, my neighbor across the street, grow up. I loved to walk downtown and spend time at the Public Market talking to Helen and Ernie Seto and young men like Mac Ruiz. I also liked to visit with the girls at the TV cable company and with Pete and Helen down on the next block from my house on Third Street. Bob Sundwall used to see me out in the yard and stop to talk, and my next-door neighbor, Brenda, has been a good friend.

"I've had a very good life; I had a great family, and I got to travel and meet people from all over the world. If I had it all to do over again, I wouldn't change a thing. And to all my good friends in Winslow I would like to say, 'I love you!'"

Graveside services for Nora were held on Oct. 7 at Desert View Cemetery. A celebration of life followed.

Nora was preceded in death by her parents, P.J. and Perfy Leal, her brother, Primo, and her sister, Dorothy Leal Ray. She is survived by her sons, John Zimmerman of Winslow and Jerry Wright of Las Vegas, Nev., and three grandsons.