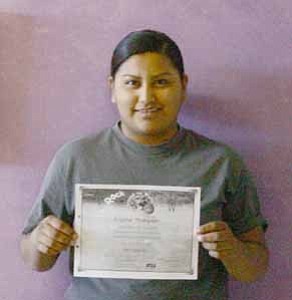 When Krystal Thompson, a senior at Northeastern Arizona Academy, sent a rock to the Arizona State University Rock Around the World Project, she was just completing a project assigned to her geology class last year. She never expected the rock to be accepted and used in the project.

Thompson's teacher, Mrs. Melvina Adolf, assigned the class to bring in any kind of rock. The class sent their rocks to the Mars Space Flight Facility on the ASU campus last year.

Among the minimum requested items to send, was a rock with a minimum 2" size and a maximum 6" size, the student's name, age and address. The project asked that the rocks be clean, or free from dirt.

RAWP began in January of 2004, and since that time, thousands of rocks have been sent from all over the world.

Once a rock is received at the facility, it receives a special number, which includes the date it was received. All the information sent with the rock is then entered into a database, and since it takes several months to analyze all the rocks sent it, it is stored until it's turn. When the rock is analyzed, all the information is recorded and the rock goes back into storage until it is needed.

Students at ASU use the information from earth rocks to compare them to rocks brought from Mars.