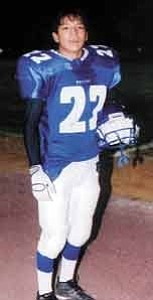 McCabe led the Warriors by rushing for three touchdowns and quarterback Begay fired two touchdown passes, ran in another touchdown and passed for 238 Yards-- the third week in a row that he has passed for more than 200 yards.

Hopi's one bright spot was Derrick Dick who rushed for 116 yards on 14 carries.

Hopi wasn't able to move the ball on the opening drive, but the Bruins Roper Crook recovered a fumble at the 49. Two plays later Bendrick Nez intercepted a Hopi pass and returned it 25 yards to the Hopi 43.

The Warriors moved 43 yards in 11 plays for the touchdown. The keys were a 23 yard pass from Carson Begay to Devin Nez and a roughing the passer penalty before Jake McCabe barreled in from four yards out. The kick was blocked as Tuba City led 7-0 with 4:25 to go in the first half.

The teams exchanged fumbles before early in the second quarter when quarterback Carson Begay hit Jeremy Begay with a 53 yard scoring strike. Carson Begay ran in the conversion points as the Warriors led 14-7 with 10:54 left in the half.

Three plays later, Devin Nez intercepted a pass as Tuba City took over at the Hopi 39. Seven plays later, Carson Begay scored the touchdown on the quarterback sneak. Chadson Chatter kicked the extra point as Tuba City led 20-7 with 7:27 remaining in the half.

Hopi failed to move the ball and Tuba City took over at the Bruin 46. Ten plays later, McCabe cracked over from the one yard line for the touchdown. The key play in the drive was a 39 yard pass from Carson Begay to Jeremy Begay. A pass failed on the conversion attempt, but Tuba City led 27-7 with 2:22 left in the first half.

Neither team could move the ball at the start of the third period. Tuba City's Bryan Willie then intercepted a pass and returned it 45 yards to the

Bruin five. Two plays later, McCabe scampered in from three yards out. The kick failed, but the Warriors led 32-7 with 3:12 left in the third.

Hopi then started a 69 yard drive that bridged the third and fourth quarters. The drive took 13 plays with Paul Huma running for 14 yards and Derrick Dick rushing for 11 yards on the key plays. Lionel Nevayaktewa trotted in from three yards out for the touchdown. Salazaar kicked the extra point as Hopi pulled within 32-14 with 10:50 left in the game.

Jeremy Begay returned the ensuing kickoff 87 yards for a touchdown and Carson Begay connected with Bryan Willie on the conversion points as Tuba City kept themomentum with a 41-14 bulge. Tuba City closed out the scoring on a 65 yardtouchdown pass from Carson Begay to Jeremy Begay and a six yard touchdown run by Matthew Shirley.

"Give Hopi credit. They are as physical as anybody we've played this year. They didn't match up well against us at some positions, but they've improved since last year and they did a good job against our run," he said.

Coach Tate credited twins Scott and Matthew Jeppson with leading the defense, but he emphasized that Brian Willie came up with a key interception and McCabe came through with a key tackle that could have let Hopi High back into the game.

Coach Tate has three players who could be playing college ball next year. Quarterback Carson Begay is being recruited by Ivy League schools, tackle Chris Attakai has received letters from Oregon and Georgia Tech and Jake McCabe can play junior college or Division 2 football.

Tuba City High School will host Monument Valley next week, but looks forward to Winslow as the Coach Tate feels the Warriors can compete for the 3A North Title this year with the hope of hosting a state playoffgame at home.

"We have a legitimate chance at beating Winslow this year," he said. "We both played Snowflake close."