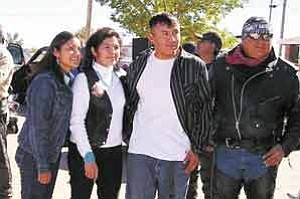 Photo by Karen Francis The Benally family reunited - Rozanna, left, Ryan, Rebecca and Ray., RyanÕs dad, who also rode in the honor run for his son.

The idea for the surprise began during the Council's annual horse ride in July. Ryan's sister Rozanna, who was Miss Utah Navajo at the time, rode with the delegates in honor of Ryan. At that time, the Benally family began discussions with delegate Noble for planning a surprise honor run for Ryan.

"I just told them to tell us when and where, and we would be there," Noble said.

Ryan's sister Rozanna picked him up in Phoenix the morning of Sept. 25. Suggesting that they take the scenic route back to their home in Montezuma Creek, Utah, she delivered her brother to the Kayenta Chapter house where their parents Ray and Rebecca waited along with a convoy of bike riders for a nearly 100-mile motorcycle run to honor all armed forces personnel and veterans for their service and to welcome Ryan home from his second tour in Iraq.

"My son was away from me 7,285 miles," Rebecca said upon his arrival. "Believe me there was times I wanted to shorten that distance. I got a lot of gray hair, but I am proud of him," she said.

Not only did Navajo Nation officials kick in to offer their support for the honor run, but so did the entire community, Rebecca said.

"What makes this even more special is the caring and support that we are getting from the bikers and the community. Everyone offered to help," she said.

In addition to welcoming Ryan home, the bike riders were also welcoming home Felicia Dayish, the daughter of Vice President Frank Dayish and Second Lady Virginia Dayish. Felicia, a staff sergeant in the United States Air Force, returned home on Sept. 21. She and her parents accompanied the riders on their own motorcycles during the run.

The Vice President thanked everyone for their prayers for his daughter's safe return, saying that his family also prays for all those who are currently serving.

"They defend our freedom every day," Dayish said.

When the bikers reached their destination, dinner, a program and a gathering of nearly 300 people awaited them. At the event to welcome Ryan, a slide show of his military experience was shared with the audience. Council delegates Mark and Kenneth Maryboy also expressed their appreciation on behalf of the Council.

"The reason why we do this is to show support for our soldiers, veterans and their families," Noble said. "I mostly want to thank all the bike riders who showed up. They give of their own free time for these honor runs."

"I want to especially thank Larry Noble and the other delegates because they are there for the people, and they stand for a purpose, even when they are alone," Rebecca Benally said. "That's what differs a leader from everyone else."

She further asked the Navajo Nation to continue to support the troops who are serving the country.

"What I ask of our people across the nation is to continue to support our troops and veterans, because if it weren't for them we would not be able to enjoy freedom and unfortunately, freedom is not free," Rebecca Benally said.