Jaynez uses his music to help kids chase the blues away 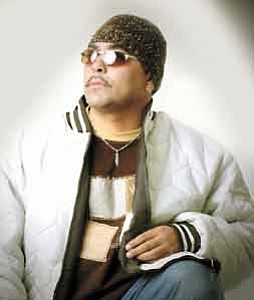 WINDOW ROCK -- Some believe people can get rid of the blues by singing the blues.

Upcoming native singer Jaynez said he believes rhythm and blues, gospel and rap can help kids get rid of the blues.

Jaynez grew up with the teenage blues as he had several friends who were into gangs and drugs, which is when he became involved with "graffiti." But Jaynez' graffiti was more about getting permission and painting murals with spray paint then the usual connotations that graffiti takes on.

His painting murals, which were found throughout Los Angeles, came out against gang violence and child abuse.

"Our message was stay away from gangs and drugs. We started break dancing with the message of stop the violence," he said. "We channeled the positive."

Jaynez said some would ruin the idea of graffiti because they would deface property without permission.

"But we were muralists who considered ourselves to be working on pieces of art. We worked with L.A.P.D. and everybody saw the value to doing it legally," he said.

Jaynez started thinking that if he could paint with a spray can then he could really do something with a paintbrush, so today when he has time he paints portraits with watercolors and oils. His paintings have been exhibited at the Los Angeles Art Festival and donated to charities.

"If someone whose coming up is doing well then don't put them down. We can all go farther that way. Then we can all give back to the community," he said.

Jaynez often gives motivational speeches at schools and youth gatherings. His message includes anti-drug, anti-gang and supportive of not giving up on education for those who have a tough time getting through.

Jaynez, who is Navajo, Cheyenne and Mexican, has produced one CD and expected his second out by the end of September.

The first CD was called "My Family." It had 14 songs including 10 with rapper Justified. But don't expect the hardcore lyrics from many rap songs as Justified carries the same message as many gospel songs.

"It's another way to reach the people. I just change the message," he said.

Jaynez has performed throughout America and parts of Canada since his first CD. He has shared the stage with national entertainers such as Usher, Faith Evans and Enrique Inglesias.

The new CD, called "Do you want to dance?," includes 10 original songs except for one tune which is a remake of "Got to give it up" by Marvin Gaye.

"Since I was little, I liked the old Motown sound. Marvin Gaye inspired me along with the Stylistics and Smokey Robinson," he said.

Jaynez, whose real name is Jovanii Nez, knows he's different from most Native Americans as he grew up in Fontana, Calif., in the Los Angeles area.

Many describe his voice as smoother then most Native American singers.

Jaynez has found a unique niche as the first urban native rhythm and blues singer.

"There was nobody else in that category, so I thought

I would give it a shot," he said. "I want to be good enough to not just represent myself, but Native Americans."

"People still ask me 'how come you have no feathers' or long hair. They still think we live in teepees. Some dress to meet the stereotypes, but my music is for anybody. I have short hair and I don't wear native jewelry on stage unless it was given to me by my family," he said. "I want people to view me as an urban singer and a person.

"I aspire to show the world that a native's voice can be heard in this style of singing, and to bridge the gap for natives into the mainstream music world, breaking down stereotypes which lead many of our people to believe that the only way we can be heard is with a drum or rattle in our hands. This is our time to shine and be heard in any way that our hearts feel," he said.

Jaynez also owns his own label Dream1 Records and his CDs are available through www.dream1records.com.

Another part of Jaynez's past was serving in Desert Storm in Iraq.

"It was a big shock to see a place so different and see so many die for what was probably a waste of time. I consider war a waste of time, but I had to go," he said.

One of his causes is the Navajo Code Talkers as he has raised funds for the Navajo Codetalkers Memorial Foundation, donating his time and talent producing and performing at various events honoring the code talkers.

Jaynez retains patriotic feelings, poining out that he sang the national anthem for the Native American Basketball Invitational at American West Arena in Phoenix this summer.

Jaynez, who has a bachelor of arts degree in business administration from Chapman College in California, is studying pre-med at the University of New Mexico at Albuquerque. He hasn't made up his mind whether to attend medical or veterinary school.

Jaynez, 31, is divorced with a 10-year-old daughter Jazmine.