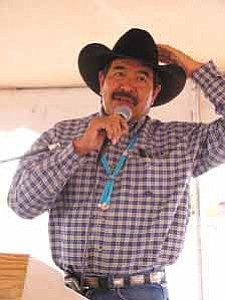 "This is an important day for us, as we have received the tribe's authority to continue as a 638 facility," Randall said.

Randall, in turn, introduced board members Rocky Yazzie, Thomas Cody (also President of Leupp Chapter) and Bahe Jackson along with traditional practitioner Pat Ashley, who offered the blessing for the event.

Thompson was enthusiastic about the Health Care Center, pointing out the high number of Native American employees.

"It is exciting to see our native young people perform, and to see how much we've grown."

Thompson went on to recognize other people involved in the process of WIHCC, including Eunice Begay, Lena Fowler, Thomas Walker Jr. and Manuel Shirley among others.

He also mentioned the long-standing attempt to obtain a new facility.

"This is a day to celebrate what has been accomplished," Thompson said. "You need to pat yourselves on the back."

WIHCC Board President Sallyann Dick sketched the history of the institution, which served as a sanitarium before becoming an Indian Health Services institution.

"We are fortunate to be one of the three institutions selected as pilots for 638 designation," Dick said. "Before becoming a 638, we operated under Indian Health Services, and as far as having worked here and having experience as a Health Board member, IHS is very limited in various ways. Since we went 638, I have seen a lot of accomplishments. Our staff has done a great job--a lot of people have come through to get treatment here. I salute the staff--if it were not for them, we would not be here today."

Some of the improvements that Dick outlined included the new buildings and expanded staff and services.

"History is a long process of going forward," Dick said.

Members of Navajo and Hopi communities can look forward to progress, including a new facility in Dilkon and an expansion of the Leupp clinic, she continued. Finally, she reported that one result of a meeting with 638 headquarters staff from Rockwell the night before was a recognition of the accomplishments made by WIHCC over the three years it operated as a 638 facility.

Frank Armao, clinical director, described the previous three years as a 638 facility as a time of "blood, sweat and tears," amending his statement to point out that no one had actually hemorrhaged.

"We have been a 638 corporation longer than our involvement in Iraq, and have been somewhat more successful," he joked. "As I look back, I see major changes--five big ones, one not good at all."

Armao listed improvement in the healthy baby and families as well as prenatal services as a big improvement. Added to this was what he described as a "tremendous relationship" with Winslow Memorial Hospital, including delivery services. Part of the relationship, he said, resulted from Dennis Randall's position as Chief of Staff at both facilities. Further, Armao pointed out that both he and Sallyann Dick served on the Board of Directors at both institutions.

Another major improvement Armao cited was in management, leading to staff satisfaction and retention.

Further, the integration of traditional practitioners--Jones Benally, joined this year by Pat Ashley--has improved the services WIHCC provides, Armao said. He also praised the efforts of Ray Bedonie--one of the "creative guys" that has helped facilitate needed improvements.

But there was one change Armao called "not good at all"-- the increase in diabetes and heart attacks among WIHCC's service population.

"We have been seduced by fast food and technology," Armao said. "But the Navajo people have been awakened to this problem. We can prevent diabetes in a whole lot of people and push back the onset in others. We can prevent complications in the future."

Leroy Thomas, a representative of the Teestoh/Dilkon area, said that he was thankful to be in Winslow as part of the 638 celebration.

"I believe in Navajo initiative. I believe every Anglo and non-Indian working here should understand Navajo, and that they should learn about our culture and way of life.

"If we believe in our sovereignty," he continued, "it seems that 638, the way it was introduced, is a way to have leadership, part of our sovereignty."

Thomas said that the work and effort that went into the 638 effort and the celebration that day was something very special. He also expressed his support for a health facility in Dilkon, as there are a good number of veterans there who have helped with the initiative for a facility there to meet their needs.

"The president is currently en route from Norway, where he was recognized for his leadership in an area dealing with uranium," Store said, mentioning the health problems encountered by Navajo uranium miners from the '50s and '60s. "President Shirley was recognized for his stand against uranium mining on the Navajo Nation. He asked me to be here today. The president and vice president are in support of your efforts here."

Store compared the progress of WIHCC to Navajo parenting. Parents, he said, are very aware of their child's health.

"They celebrate their child's first smile, their first laugh, their first step," Store said. "Today is like the first or second step for you, and I want to congratulate you for your efforts."

Sally Pete, CEO of WIHCC, stood to welcome her many guests and to thank her staff for their support, and noted the steady increase in staff to 166 employees and 31 IPA (Independent Physician Association) physicians.

As if in response to this observation, the wind continued to increase as well, but it was no match for the energy of the Navajo Nation's own James and Ernie. The duo immediately launched into a lampoon of their experiences at IHS facilities, to the delight of all. Both James and Ernie managed to work the number "638" into their performance--James claimed that it was his IHS chart number, Ernie swore that was how much he weighed when he was born.

The pair performed while the crowd was served a barbeque plate including peach cobbler.

"Hey, one of you send your kids up there to get us a plate," Ernie called loudly. "We're really hungry!"

Following the comedians' performance, State Senator Albert Hale braved the wind and addressed the dwindling crowd, holding his hat firmly in place with one hand. Hale referred back to his term as President of the Navajo Nation. "I have always believed that our health, that of the Navajo people, is our responsibility. We should not have been looking to other entities for our health."

Hale referred to traditional Navajo practices such as prayer in the morning and listening to the cultural teachings as part of maintaining a healthy person.

"Without a healthy people, we cannot have a healthy and strong sovereignty," Hale said before concluding the ceremonies with a benediction.