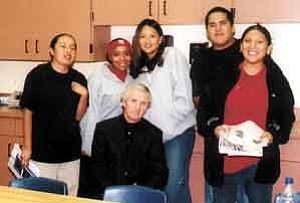 Engelhardt, who has been in the radio business 35 years, gave the radio class students pointers on how to read for radio. He told them that correct pronunciation and finding a comfortable pace is paramount.

"You can easily be misunderstood. Don't run your sentences together. Don't mumble. Think about where you put the emphasis on your words. This does take practice," he advised the students.

Engelhardt, who has been at the Winslow radio station for 28 years, said radio is beautiful because of its immediacy. He told the radio students that they should critique each other and keep asking how they can get better.

"Just about everything around you is news," he said because area residents are interested in what is going on at the high school and the community.

Engelhardt told the journalism students to be aware of everything that goes on around them. He urged them to read newspaper articles and think about how they would have approached the same story.

"It's up to you to write, expose and solve," he said. "You can ask yourself: 'How can I make the school and community a better place?' and 'What kind of legacy can I leave for the next class?' "

Engelhardt, who was raised in Kansas, said journalists have the task of doing their best possible job even when they are having a terrible day.

Radio students Anna Honie and Terra Morgan were on KUYI at halftime of the Hopi-Tuba City football game Sept. 30.

The Hopi High radio class also recently visited KUYI where they toured the studio and got a brief lesson about radio editing equipment from KUYI Station Manager Lisa Youvella. The Hopi community radio station, is found at 88.1 on the FM dial.