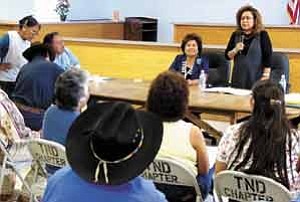 RECA provides compensation to uranium miners from 1947 to 1971, and has been expanded to include other categories) amendments, as well as reports on the efforts of tribal leaders to prevent future uranium mining on the Navajo Nation.

The meeting, chaired by Coconino County Supervisor Louise Yellowman, attracted a large crowd. Yellowman made introductions of various presenters and community leaders before giving the floor to Phil Harrison, who has been involved in the issue for at least 30 years in various capacities.

He serves on the Advisory Board of the Navajo Uranium Miner Oral History and Photograph Project.

Harrison co-authored the book, "Memories Come to Us in the Rain and the Wind" published in 1997. The book is a moving tribute to many of the victims and survivors of the uranium industry on the Navajo reservation, and includes pictures and interviews of these individuals. He also serves as president of the Uranium Radiation Victims Committee, and is now the Office Administrator of the RECA Field Office in Shiprock, N.M.

In defining why Navajo uranium victims have such a hard time filing a successful claim, Harrison looks to the criteria that most Americans might have no problem with satisfying--but on the Navajo Nation, it isn't that easy. Many Navajos were paid cash for their work "under the table" and therefore many claimants have no proof of employment and also have no record of income taxes. Subsequently it is difficult to document work history. To receive compensation, a miner must be able to document working level months, a measure of the dose of radiation from radon exposure.

Also, due to the high turnover of Indian Health Service doctors, it is difficult for Navajos to document medical diagnosis. Because the criteria demands precise medical records, this is yet one more stumbling block that Navajo uranium victims face.

"We are seeking three technical amendments and three statutory amendments to reform RECA," Harrison said. "When we looked to amendments in 2000, we were told, 'let this bill go through. Let's get going, then let's come back and amend it.'"

Harrison has heard disclaimers from the government including the statement that uranium has not caused Navajo lung problems--they have these problems because their houses have dirt floors or from smoking. As pointed out in Harrison's book, it was rare to find a Navajo who smoked regularly.

As far as downwinder victims are concerned, without grazing permits to prove residency in an area, it is difficult to establish that individuals have lived in the path of airborne uranium contamination.

At this point, Harrison reported, there is only a 1.4 percent approval rate for Navajo downwind victims.

In a recent visit to Washington (Sept. 12 -- 16), along with Navajo Nation President Shirley, Harrison learned that out of a total of $952 million paid to uranium miners, only $98 million was paid out on Navajo claims.

Harrison's office seeks to assist Navajo uranium victims establish a work history, to document what family members were with a uranium worker, when children were born.

"This is cumbersome work, but our office helps establish records," he said.

Harrison also addressed Part E, which is not compassionate pay, but part of the federal Workers Compensation, where a person can file for up to $150,000 due to loss of income as well as the percentage of whole body impairment.

"These claims will be looked at on a case by case basis," Harrison said.

Harrison also spoke of the Dine Natural Resources Protection Act, signed into law by Shirley, which forbids uranium mining on the Navajo reservation. Shirley and other proponents of the law hold the United States Government in violation of the trust relationship.

"Right now the Navajo Nation is risking a lawsuit for the Dine Natural Resources Protection Act," Phillips said. "Uranium mining is not sustainable to the Navajo Nation. We are still paying for it through premature deaths, contamination of lands and water and the erosion of money from local communities."

Pres. Shirley, she said, has called the loss of Navajo lives through the uranium industry genocide because too many have died or lie on their death beds.

"Right now, Navajo Nation sovereignty is being challenged because of the threat of being sued," Phillips continued. "We expect a law to supercede the new Protection Act, and we continue to plead with congressmen to honor treaty rights and our sovereignty. We have an inherent sovereign right to protect the health and well being of our people and our natural resources."

Alice Colorado Howard, a survivor of colon cancer she believes was caused by uranium exposure, stood to encourage all present to bring their children to meetings such as this one so that they could become educated in the issue.

"I want to thank our leaders for stepping up for us, for speaking for us," she said. "They travel long distances to work for us."

She explained that in her home community of Cameron many open mines exist, and that residents are not only at risk through blowing uranium dust, but from eating sheep that have grazed on grass that has been dusted by these open mines and tailings.

As the meeting continued, one sad-eyed woman quietly expressed her frustration, having tried to track her own paperwork through the process.

"I tried talking to the Shiprock office, and finally, I have been told that my paperwork is in Washington. I wonder who to trust," she said.

But Harrison continued to offer encouraging news, including a new RECA office in Tuba City.

Despite the diligent work by individuals such as Pres. Shirley and Harrison, numerous Navajo people still wait for their just dues.

"Why is it that 55 years later, Navajo miners, surface workers and families are still struggling for compensation and only 10 percent have been paid?" Harrison asked. "Why have they waited over 50 years for compensation for their sacrifice? They gave their voice [as Code Talkers] and their lives working in the uranium industry, yet the federal government has been neglecting them? Why? Is it because most Navajos do not have the necessary paperwork? They don't know how to read or write? Or is it because no one cares?"

But, closing on a more positive note, Harrison said that despite his concerns, he believes that as a group--including those Navajo uranium victims present at the meeting--there will be improvements in the law.

"We all need to help each other, we need to pray for our leaders that we can resolve this issue," Harrison said.

"I hope we can resolve this so that we can retire and move on to greener pastures," he continued with a chuckle. "I know this will work. I know you people will get paid."