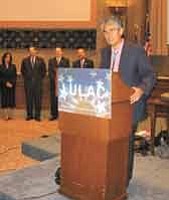 WASHINGTON -- The Navajo Nation has gained an unexpected ally in the League of United Latin American Citizens, which invited Navajo President Joe Shirley Jr., to join its national president on the podium during a press conference here Sept. 29.

Hector Flores, national president of the 76-year-old LULAC, introduced the President as a brother and relative of the Hispanic people. He said it was important to form a coalition with the Navajo Nation.

"This nation is a nation-within-a-nation," Mr. Flores said in his introduction. "They have sovereignty because they were here before anybody."

LULAC is this nation's oldest and largest Hispanic membership organization.

Established in 1929, it has a history of commitment to the education of Hispanics and other minorities.

The seminar is a three-day program that brings student leaders from across the United States and Puerto Rico to Washington, D.C., to work on public policy issues and meet with national leaders from Congress, Corporate America and other institutions.

Some 53 students participated in this year's seminar and met President Shirley. He spoke to them about the DinŽ Natural Resources Protection Act, which prohibits any further uranium mining or processing within the Navajo Nation. The Nation passed the law to protect its people from more disease and to protect its land and water from being further contaminated through mining, processing, radioactive wastes or accidents.

"As a sovereign nation, we passed (this law)," the President said. "Because of mining of uranium on Navajoland, many of our youth and elders have been killed. Many are still ill today because there are no answers to the cancers it causes."

Despite the new law, adopted by the Navajo Nation Council on April 19 and signed by President Shirley on April 29 in Crownpoint, N.M., two companies are seeking to resume uranium mining on Navajo land. They are Hydro Resources Inc., and Strathmore Minerals Inc.

"It seems (the mining companies) do not care about our youth, our land and our water," the President said. "That's why we're reaching out. That's why we appreciate LULAC."

To ensure that does not happen, two weeks ago, President Shirley, Council Delegate Alice Benally and representatives from the Eastern Navajo DinŽ Against Uranium Mining and the Southwest Research and Information Center of Albuquerque visited more than two dozen Senate and Congressional offices to ask that Navajo sovereignty be acknowledged and respected.

"I support the Navajo Nation1s Resolution banning uranium mining on Navajo land and the DinŽ people1s sovereign right to enforce this ban," Renzi said in a recent press release. "I will continue to work to eliminate any mining that could potentially contaminate sources of Navajo water. We must work to stop the threat of uranium exposure before it infects our future generations."