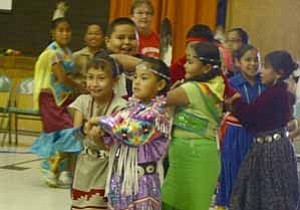 <i>Photo by Christyl Buckles</i> <b>Students at Bonnie Brennan Elementary danced with fellow students, teachers and parents, during the Inter-tribal Round Dance during their Native American Dance program Sept. 30.</b>

Prior to the dancing, several students explained about the native dress from tribes in the Navajo and Hopi cultures.

Dancing began with traditional Navajo dances, including the Feather Dance. Among the favorite was the Hopi Clown Dance. Those dancing the clown dance dress up with necklaces made of fruits and vegetables, and paint their bodies.

During the dance, a relative may take the dancer's necklace, but the person must repay the dancer by cooking for them.

The students spent many hours practicing, and many made their own clothing.

To close the dnace, the students performed the Inter-tribal Round Dance, pulling their favorite people up to dance with them.