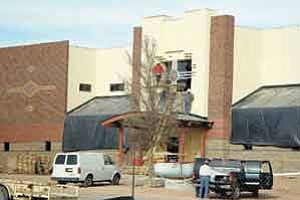 TUBA CITY -- In March, students, staff members, administrators and Tuba City Unified School District Governing Board members were witnesses to a historic event. Another page turned for TC High Warrior history during the early stages of construction/demolition of former classrooms, the old gym and swimming pool.

But in its place, and expected to open on schedule in mid-January according to Ron Begay, TC District construction manager and support services director, will be a new two-story, state-of-the-art technology equipped building. This facility will house17 classrooms, high school administrative offices and a lecture hall area equipped with the latest audio-visual equipment to complement the million dollar sports multiplex, TC High's crown jewel, Warrior Pavilion.

Formal groundbreaking last March was followed up by several stages of construction with the final stage beginning in March 2006 -- rebuilding the demolished portion of the building.

The original damage to the building began with a fire that started in the Marine Corps Junior ROTC storeroom more than three years ago. Tuba City District's team of former Technical Writer/Foundation Officer Dr. Tanya Gorman Keith and former Business Manager Joe Begay along with Ron Begay, were able to develop a proposal funded by the State Facilities Board to repair and upgrade existing school facilities.

The SFB accepted the TC District's engineers and the team of three's (Gorman Keith, Begay and Begay) recommendation for building replacement and has since funded the major portion of the project.

In fact, the trio are publicly credited with moving this new building proposal forward, resulting in newer, more advanced classrooms for the growing population of TC High and new administrative offices for TC High school personnel.

Phase 3 of the project is being funded by a Federal Impact Aid Grant.

Warriors and Lady Warrior students have been extremely patient and supportive during the construction phases, utilizing temporary long hallways to classrooms and the library.

In honor of TC Warrior green and white school colors the student population has dubbed the long plywood hallway equipped with lights and portholes "the Green Mile." During classroom transfer time, it's crowded with two-way foot traffic.

The entire construction process has taken about nine months, and this new two-story building will allow more curriculum choices for its students.

For more information about ongoing TC High construction or to take a tour of the new building when it is complete, call the TC District Office of Public Relations at 928-283-1072 to schedule an appropriate time.