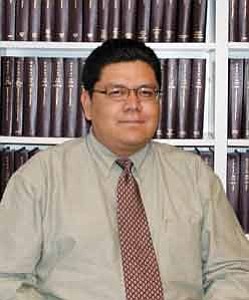 PHOENIX -- Milton Bluehouse Jr. said he will work hard at his new task of improving the quality of life in Arizona for Native Americans.

Bluehouse, a Navajo, has been appointed as the executive director for the Arizona Commission on Indian Affairs. Bluehouse takes the reins from Jack Jackson Jr., who left the job to run for Congress. Bluehouse said he hopes to use the spirit of his grandmother Dr. Annie Wauneka to improve the quality of life for Native Americans in Arizona.

"My grandmother provided a lot of passion to serve the tribal people. I want to do that for Arizona's 21 tribes. She was a role model for me and natives across the country. I wonder what my grandmother would think of me getting this position," he said.

Arizona Gov. Janet Napolitano said in a news release that she appointed Bluehouse because of his extensive knowledge of tribal health, social services, veterans, energy and environmental issues.

"That makes him uniquely qualified to lead the commission," she said. "His expertise will give the commission the opportunity to be an even more integral part of the state's coordinated effort to address Indian issues."

As executive director, Bluehouse is charged with assisting the Arizona

Commission on Indian Affairs with its duties of coordinating interaction between tribal groups and state and federal agencies.

While Bluehouse wants to work with all of Arizona's tribes, he said he is in a good position to help his Navajo Tribe because he is well aware of the challenges that face Navajo regarding health care, social services, veterans affairs, economic development and the pending closure of the Kayenta Mine.

"I want to work with the leadership and directors to explore alternatives," he said.

Bluehouse said that this is an exciting time for the Hopi Tribe with the change in leadership as Ivan Sidney just became chairman.

"I want to meet with the Hopi leaders and find out how the commission can be of assistance to them," he said. "I want to help the small tribes that sometimes haven't had a lot of attention. I need to get on the road and meet with tribal leaders."

Bluehouse started the job Nov. 17 and was reviewing reports last week to see which projects need to be put on the fast track. He said his three priorities are finding and determining what services the state provides to Native Americans and how they can be improved; creating a model agency that will get things done; and working with other government agencies to use all theresources possible.

First, Bluehouse said with pending federal cutbacks projects will have to be prioritized for funding and more funding could be sought from the state and other places.

Second, Bluehouse said the New Mexico Commission of Indian Affairs has created a template for success with a good budget and consultations with the state that has proved to be mutually beneficial for the state andthe New Mexico tribes.

Bluehouse said he wants to copy this program to improve the Arizona Commission on Indian Affairs.

Third, Bluehouse said he wants to pool resources with the Arizona Intertribal Council so they can provide more services to Arizona's Native Americans.

He said it will also be necessary to work with Gov. Napolitano and the state legislature to improving funding and policies for Arizona's tribal members.

Bluehouse said he is looking forward to Indian Nations and Tribal Legislative Day Jan. 17, when the tribes bring their issues to the state legislators each year.

Bluehouse credits longtime commission employee Vera Phillips with passing along her knowledge so he could hit the ground running.

After graduating from law school, Bluehouse served in the Marines. He recently served as legislative associate for the Navajo Nation Washington D.C. office where he lobbied Congress and the federal administration on healthcare, social services and veterans affairs for the Navajo Nation. He also recently worked as associate director for Tribal Lands Programs for the Trust for the Public Lands in Santa Fe, N.M.

Born in Keams Canyon, he was raised in Ganado and graduated from St. Catherine's Indian High School in Santa Fe.

When Bluehouse learned of his appointment, he called his mother Irma Bluehouse who was herding sheep at her home in Tanner Springs.

"My mom's really excited," he said.