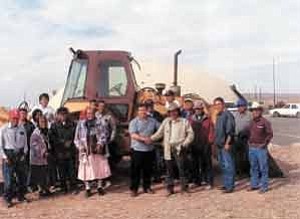 BIRDSPRINGS -- On Nov. 8, community members and chapter officials of Birdsprings Chapter welcomed El Paso Western representative Charles Scott Curtis for an exchange of friendship and commitment to continuing this relationship into the future.

Chapter Delegate Thomas Walker said that the unexpected gift was gratefully received by the chapter--which had not solicited the gift.

"Several members of the community are employed with El Paso," Walker said on Nov. 22. "Through these employees, the company learned that we were interested in obtaining heavy equipment for projects within the community. The company had surplus machinery on hand, saw our need, and made this donation to the chapter."

Walker said that it was encouraging to see that community networking spurred the gift of the backhoe and recognized El Paso's generosity in responding to the chapter's need.

"I think it shows that even though El Paso is situated down the road from us, this shows that they are community minded and they are indeed members of the community," Walker said. "They are an industry, but they provide employment within the community."

According to Eileen Hardy, community services coordinator at the chapter, gratitude from area residents was overwhelming."We plan to improve the surroundings here [at the chapter house] and at the same time improve some of the roads in the community," Hardy said.

Walker gave details of some of the improvement plans, which includes plans to remove heavy debris and create some earthen dams.

Hardy said that the chapter hosted a meal in honor of El Paso representatives, one way to show gratitude for the company's generosity.

The chapter is developing policy on the use of the backhoe, Walker said. That policy might include stipulations that would allow community members to rent the backhoe.

"El Paso is a valued member of our community," Walker added. "The company could be a resource in many ways and has assisted in establishing stronger relationships within this community. On the part of the chapter, the donation is very much appreciated, especially in these times of limited resources."

The limitation in resources has led the Navajo Nation and its chapters to look to alternative sources for funding, according to Walker.

"We are not looking for handouts," Walker pointed out. "If a gift or donation benefits the collective good, it is not a handout.

He said that the holiday season was about giving, and being thankful for those gifts received. Walker, who had finished delivering a report to the Senior Council of Birdsprings Chapter, recognized efforts of the Office of the President of the Navajo Nation, which had received a large delivery of turkeys to benefit families in need on the Navajo Nation. The President's Office had designated 60 of the turkeys to the southwest area of the reservation, and Walker planned on spending the evening and part of the following morning delivering 20 of the big birds to needy members of the community.

"These are some of the examples of holiday giving--some of the items we can be thankful for," Walker said.