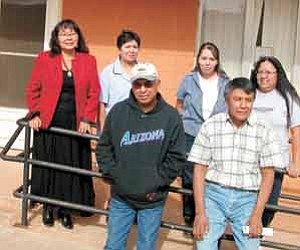 LEUPP – Just three years after school officials set out to replace the 40-year old Leupp school, this month Bureau of Indian Affairs will put out a bid to replace the dilapidated school.

School officials said on Nov. 15 that they expect the award to be announced in early December and then plan a groundbreaking later that month.

“The design has been approved so its going out for bid now,” said Lorraine Jones-Noline, Director of Administrative/Support Services for Leupp Schools, Inc., a grant school. “The design was being rejected by the BIA for deficiencies. So we had to make numerous trips to Albuquerque (BIA central office) for corrections…it took all the key people to go there and really explain our needs here.”

Officials hope to have construction started by January.

“The BIA told us it will take 18-24 months to complete construction of the new school,” said Henry Begay, facilities director. “So, the school won’t be completed until the year 2008.”

According to Jones-Noline, the calculation for the school replacement project was calculated using the 2.5 percent growth for the academic and 1 percent for the residential programs needs utilizing the 1995 Education Space Guidelines and current applicable policies of Office of Facilities Management Officers and Office of Indian Education Program.

The new school will accommodate up to 369 students from K-12, including a dormitory for 100 boys and girls, and a new multi-purpose building. “Practically all the buildings will be demolished, except for the school dome, and a few other buildings,” said Jones-Noline. “We have to start moving out of our offices in December and into modular buildings. The dome was a donation and it will be renovated to serve as a library.”

Currently, students are still in the old classrooms but will be moving into the modular classrooms in December.

“Planning for the new school started under the previous school board,” said Rosita Kelly, human resources director. Jones-Noline said the project was in progress when she came onboard in 2003. “The previous board president Roy K. Dan and Leonard Chee, former support services director, submitted the application,” she said. “We then took over from there.”

The old Leupp School was built in 1958 and is now more than 40 years old, said Henry Begay.

“It has poor overall conditions, along with health and safety hazards. There’s asbestos and pipes wearing out, he said. “In our annual safety inspections, our deficiency was 70 pages long before we started correcting them…In some places, the doors are obsolete and out of compliance. We couldn’t correct some of the deficiencies.”

Noline-Jones said many in the community are proud to see that a new school is going up.

“It provides a very good academic environment for the children,” she said.