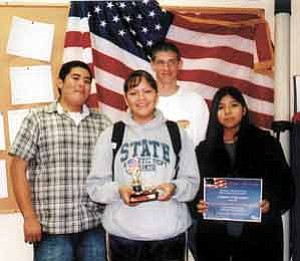 Portraying the theme of “Then and Now,” Hopi High cadets dressed in military attire from old uniforms to new and recent ones.

Hopi High Maj. Phillip Taylor and Sgt. Kevin Nance said they were proud that the Bruins won the award. They praised the cadets for representing Hopi High School in an outstanding manner.

“I felt pretty good about our cadets winning the trophy,” he said.

Thompson said most of the crowd was cheering when Hopi was announced as the winner of Best Theme.

“They were basically happy for us. I even saw some veterans saluting us,” he said.

“We were motivated and pretty excited,” he said. “I think our cadets did a good job.”

Weber, a 17-year old junior, said the Hopi High School cadets also visited the National Guard Armory while they were in Mesa.

Weber, who enjoyed eating at McDonald’s, said he also felt good about his school’s cadets winning the Best Theme trophy.

Weber said he enjoyed the trip because he was able to get away from home for a couple of days.

“We ate, slept and marched,” he said about JROTC’s activities.