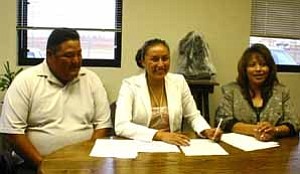 Ben came to Winslow High School as a sophomore and has been a starter for the Winslow Lady Bulldogs since her arrival. She is entering her senior season after leading her team to two Arizona State 3A Conference Girls' Basketball Championships. She was selected to the Arizona All State Team as both a sophomore and as a junior and is a likely candidate to win that honor for a third time.

"Winning the state championship was my biggest thrill in high school," Ben said. She added that she is anxious to play for the Lady Lumberjacks, who are favored to compete for the Big Sky Conference title this season. She said that she is ready for the challenge of playing at the next level.

Perhaps the finest performance of Ben's high school career came in the 2003 Arizona State Championship Game when she scored 28 points and set the state record for three point shots made with six in leading the Lady Bulldogs to the win over Monument Valley.

Coach Petranovich said that Ben has a shot at reaching the 900-career point level and setting the school career scoring record. He said that she will definitely be missed in more ways than one.