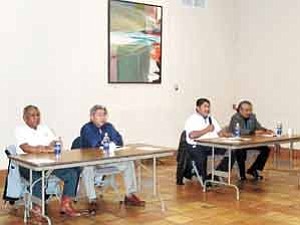 Ann Widmann/Observer Hopi Tribal Chair and Vice Chair candidates hosted back to back forums last week. Above, they debated election issues Nov. 10 at the Museum of Northern Arizona in Flagstaff. The previous night they squared off at the Hopi Veterans Center in Kykotsmovi.

KYKOTSMOVI -- Neither candidate supported the idea of a unified school district on the Hopi Reservation during the forum held Nov. 9 at the Hopi Veterans Center.

Hopi Chairman Wayne Taylor Jr. said last year's education summit showed that there is no unified school district on the Hopi Reservation. He said the Hopi Tribal Council has failed to provide any direction for the local school boards.

Chairman Taylor said a central body is needed to look at education issues, especially declining federal revenues. He said administrators and school board members need to be gathered "to see how we can collaborate and see how we can have a system that we all can embrace."

"The tribe has not spent a penny to help the schools," he said.

Sidney continued to call for open government and Chairman Taylor portrayed himself as a man of ideas.

Sidney received the most amount of votes in the Nov. 2 primary race and Chairman Taylor was right behind him.

The two will square off today (Nov. 16) in the general election.

Former Hopi Chairman Phillip Quochytewa Sr. and Hopi Councilman Todd Honyaoma Sr. will battle for the vice chairman's job in the general election. Quochytewa received the most amount of votes in that race with Honyaoma placing second.

Three of the four candidates used their opening comments to give their experience.

Quochytewa served as vice chairman and has served 12 years on the tribal council. He is a retired police officer and has a background in administration. He also serves as a commissioner on the Arizona Department of Veteran Affairs.

Sidney noted that he is a former chairman, but has also worked as an administrator at Northern Arizona University and served as police chief of the Hopi Tribe.

Chairman Taylor noted that he has been accused of having a closed government, but he said that has to be a two way street as he had hoped to see more people at tribal council sessions. He added that he has worked hard to secure more of a land base and to diversify the economy.

On the question of whether the tribal council had abused its authority, Honyaoma responded that the council has not always followed its policies.

Quochytewa said at the beginning of each year, orientations are given to the public so they can understand the council policies, but he added that these orientations have to be brought to the villages as well.

Sidney said policies have to be enforced, but he emphasized that elected officials must have respect for the people. He said there is something wrong if

the government feels it is above the policies.

Chairman Taylor said he has put forward his best effort to be the best leader and role model. He noted that a draft Code of Conduct is set to go before the

Regarding crime, Sidney said social problems need to be addressed.

"People should not go to jail for social diseases," he said in reference to alcoholism. Chairman Taylor stated that last year he signed an executive order to establish a task force to look at the meth problem on the Hopi Reservation.

"We've had a long-standing alcohol problem, but this meth problem woke us up," he said.

Sidney and Taylor agreed that Hopi culture and language needs to be used to remind people about the Hopi way of respect.

The vice chairman candidates were asked why some task team meetings have been closed to the public.

Quochytewa said the land task team had to have some closed meetings so people wouldn't know their negotiating price.

Honyaoma said he would at least inform the board of directors at his village about what the task team was doing.

"I don't know if any meetings were closed, but (some of) the task teams did not get information to the public," he said.

Sidney said that task teams were never part of the Hopi Constitution and the issues need to go to the people through committees. The problem with the task teams, he said, is that the council members are the ones on the team while he feels members of the public should be making decisions from the committees.

The candidates addressed how jobs and tribal operations may be threatened due to the pending closure of the Mohave Generating Station and the Peabody Mine.

Quochytewa said he is confident that other funding sources will be found.

Sidney said Hopi survived hundreds of years before these operations and will continue to do so, but he questioned why the tribe was spending money on buying property in Flagstaff and in other places when there are needs on the Hopi Reservation.

Chairman Taylor responded that Hopi knew the possibility of the closures and invested money in businesses that would have an immediate return. He said his administration tried to strike a deal with Reliant, an energy company, because it would have brought in $150 million annually.

"That's what we were looking at to lift us up, but that's no longer there," he said.

Chairman Taylor said the tribe is pursuing a clean coal energy company, wind and solar projects, a telephone company and an APS distribution line for electricity.

Honyaoma said the tribe has plenty of money with $200 million in investments and $80 million that remains from land agreements.

"Why hasn't this information been disseminated?" he asked. "Why layoff people when we have good money?"

The candidates also fielded the question about whether some tribal council members should continue to be appointed by the village Kikmongwi, or religious leader.

Honyaoma said he was opposed to these appointments because the appointed council members only serve a select few.

"We should all elect so we have control over them," he said.

Quochytewa said the decision should not be his alone.

"This should be dealt with at the village level. We have to get together as a people to iron this out," he said.

Sidney said it has reached the point where council members should no longer be appointed. He said this same problem has existed for 16 years and has not been addressed by the tribal leaders.

Sidney said he is prepared and experienced to lead the tribe. He questioned what has been done by the tribe and who has been left behind.

"We need to begin to move forward. I don't want to bring decisions to the people that have already been made," he said.

Chairman Taylor responded that he hopes people will choose a leader who has brought ideas.

"It's easy to stop a project. I didn't hear any solutions or ideas from my two harshest critics," he said in reference to Sidney and Honyaoma.

Chairman Taylor said he has worked on building a foundation.

"But when we have a change we tend to stop in our tracks. If that happens, we will fall one or two steps back and fall farther behind," he said.

Chairman Taylor said it has been a privilege to serve as the tribe's chairman and vice chairman.

Quochytewa noted that he is the only veteran among the four candidates. He said the Hopi Tribe needs to be more aggressive and proactive.

"We need to change our behavior and our conduct," he said.

Honyaoma told the crowd that if they give him a chance in office he will do what they tell him to do.

"I'll be your worker. I won't dictate. That has been going on for some time," he said.

The candidates were asked if tribal employees will lose their jobs because of the pending Mohave Generating Station closure.

Quochytewa said there would be no layoffs, but Chairman Taylor said he knew of at least 10-11 pending layoffs. He said the tribe has been downsizing and the next chairman will have a smaller budget.

Honyaoma said the tribe has been sending mixed signals and he questioned what the truth is. He said the tribal council and chairman's staff both need to be reduced.

Sidney said it's time to work with all people to prioritize programs.

Honyaoma said failure to fulfill responsibilities is neglect of duty, but he added that the tribe's general counsel could not define what that meant.

Quochytewa noted that the last two vice chairmen, who were removed from office for neglect of duty, had the chance of a hearing and proper notification.

"Based on the evidence, the action of the Hopi Tribal Council was appropriate," he said.

Chairman Taylor said the tribe has moved toward self-sufficiency by creating a development corporation and is looking into purchasing telephone and electric companies.