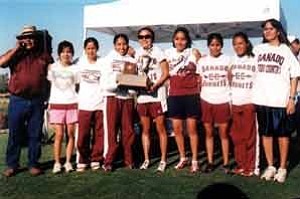 There were 111 runners in this race.

Page won the girls title as they packed four runners into the top 12 to beat Flagstaff by 17. Katrina Lee led Page with a second place finish behind Queen Creek's Kari Hardt. Page won the meet with 42 points and Flagstaff High was second with 59 points.